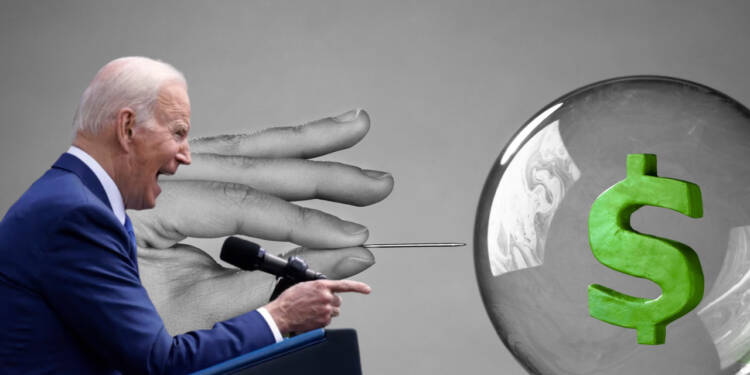 The arrival of the Democrat Joe Biden as the President of the United States is probably the most epic example of a tragedy in the making. Biden has destroyed everything his predecessors had worked hard to make.

The previous US Presidents, no matter how ruthless they were, knew exactly what needed to be done. But it seems like the incumbent President doesn’t have what it takes to protect American interests and that is exactly why his reign would oversee the official dethroning of the US as the sole global superpower and as an extension – the ruin of the USD.

What made the USD so strong?

I am sure most of you have wondered how exactly has the USD held a privileged position in the world for almost a century now. Well, the rise of USD was a necessity the day after WW1 and it was in actuality the strongest currency of the era.

According to Global Research, Following WW1, the US was “the owner of the majority of the world’s gold” which was why an international delegation “decided that the world’s currencies would no longer be linked to gold but could be pegged to the U.S. dollar, “because the greenback was, itself, linked to gold.”

All thanks to the Bretton Woods Agreement, the U.S dollar was officially crowned the world’s reserve currency and was backed by the world’s largest gold reserves.

The USD became a symbol of strength and faith and more and more nations started accumulating the currency in their reserves to bolster their security.

This is how currency and finance work. Gold is a metal that is known to hold value globally. The concept of currency works on imagination. A piece of paper holds value when it is pegged against a physically valuable item like gold and that is exactly why the USD has been the strongest for far too long because it derived its value from the world’s largest gold reserves.

However, the demand for gold was such that President Richard Nixon was forced to intervene and de-link the dollar from gold, which led to the floating exchange rates that exist today.

Biden triggers a crisis of faith

The USD was undoubtedly worthy of its place among the world currencies in the past but it surely does not deserve the spot in the current scenario.

The US government is a whooping $30 Trillion in debt and an additional $9 trillion is piled up on the Fed’s balance sheet.

So now the question that arises is why exactly is the USD so strong even with the absence of gold to back the paper?

Read More: South Korea and EU join forces to launch an economic assault on US

The efforts made by the prior administrations, whether moral or immoral, were able to secure American interests but Biden has undone everything that was built.

The 79-year-old’s reckless attempt to weaponize the USD to rid Russia of its foriegn reserves during the Ukraine war demolished the last standing pillar that was supporting the USD.

The last standing pillar is faith in the USD. Despite having no serious backing and an enormous debt, faith was the only pillar holding the fort for the USD but Biden has blown away the fort after he ordered the vanquishing of hundreds of billions of dollars from Russian securities.

Many nations like India, China and Russia are now picking up pace to take over the widened gap and it seems like there is no coming back now.

18 Everything everywhere all at once quotes