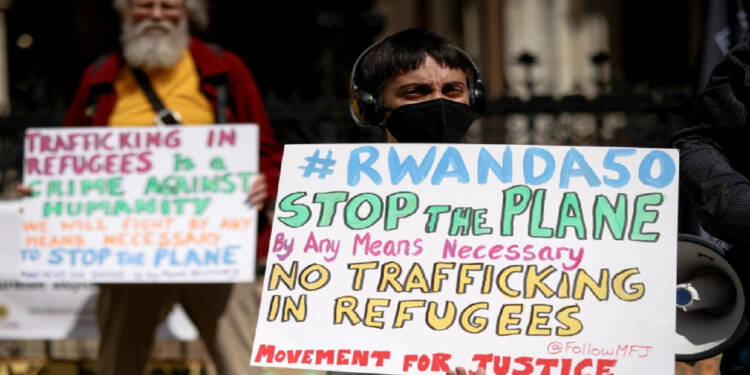 Rwanda, a central African nation, is becoming a dumping ground for the Europe’s asylum seekers.

To ensure they could transfer asylum seekers to Rwanda, the UK and, more recently, Denmark, negotiated such an agreement with the country after courting it with a one-time payment. And in the midst of all of this, Rwanda seemed eager to be caught in the trap of Europe.

A person who has left conflict or persecution in their home country is referred to as a refugee. Refugees’ legal rights are safeguarded by international law. The choice of whether to award refugee status to an asylum applicant, however, rests with the host countries.

The UK received 63,089 asylum applications in the year ending in June 2022, which is a record high of almost 20 years. Due to the unpredictable political and economic conditions in these regions, the majority of these asylum applicants are from North African or Middle Eastern countries.

Of these, almost 16,000 people and their dependants were granted a form of protection by the government. Similarly Denmark and other European nations have been facing the issue of asylum seekers especially since the 2015 Syrian crisis.

However, these clever folks in the West seem to have found a solution to this problem. Earlier UK and now Denmark has signed a pact with Rwanda in order to accommodate these asylum seekers. Given that it would be compensated to house these immigrants, it is clear that Rwanda viewed the offer to be appealing.

However, a vital question is whether these asylum seekers would discover a secure haven for their lodging in Rwanda. Well, human rights are a major concern for Rwanda itself. As per the World report, 2022, in addition to continuing to silence dissenting and critical voices, the ruling Rwandan Patriotic Front (RPF) also continued to target individuals and their families who were seen as threats to the regime. Media, civil society, and political opposition did not have access to any public area. Several prominent opponents, including opposition members and analysts who express themselves on social media or YouTube, either vanished, were detained, or received threats.

In both official and unofficial detention facilities, arbitrary imprisonment, mistreatment, and torture were frequent occurrences, and fair trial laws were frequently broken in instances deemed sensitive. Street children, sex workers, and small-time sellers were among those accused of “deviant conduct,” and there were convincing complaints of their arbitrary incarceration and torture.

All in all, there is lack of rights to fair trial, sexual and reproductive rights are violated on everyday basis, lack of freedom of expression, etc in Rwanda.

A long term pain for Rwanda

In light of this, the UK, Denmark, and other European nations’ desire to send these asylum seekers to Rwanda demonstrate a lack of accountability and a callous attitude towards them.

As a matter of fact, even the UN Refugee Agency doesn’t favour this move of UK and others. It has told the respective governments that Rwanda shouldn’t be used for this policy, warning it had “been accused of recruiting refugees to conduct armed operations in neighbouring countries”.

Also Read: The hands of genocidal queen of England were drenched in the blood of millions of Africans

But it seems Europe is trying to get rid this responsibility of accommodating the immigrants and Rwanda is caught in trap laid by the Europe by agreeing to accommodate these immigrants. Of course, Rwanda is on the way of landing itself in to a great trouble. But it is overlooking the fact that it is a short term gain and long term pain. For one thing, Rwanda is also struggling with challenges like unemployment, poverty, etc., so accepting these immigrants will undoubtedly be a headache for Rwanda. Two, these asylum aspirants will plainly lack any background that can be independently verified. Therefore, this is one possibility that terrorists and criminals could find refuge in Rwanda thereby further increasing its problems. What Rwanda does not realise is that, by accepting such an arrangement it will always be held to ransom in the name of withholding of aid, if the West’s whims and fancies are not met with.