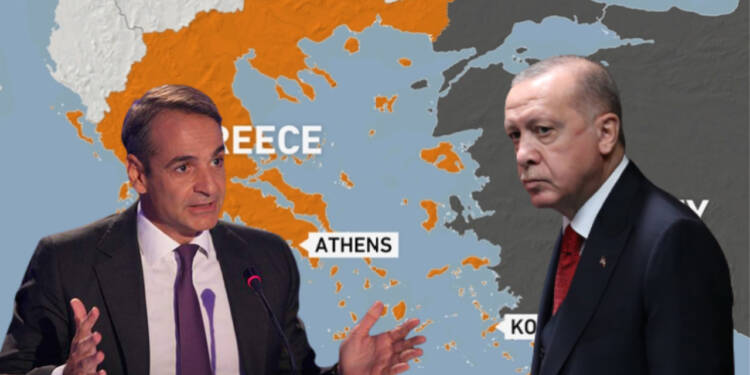 The Turkish coast guard informed that Greek coast guard ships opened fire on a cargo ship sailing in the Aegean Sea international waters. This firing has intensified tensions between the regional rivals, which have only grown in recent weeks.

He added, ‘Two Turkish coast guard ships arrived in the vicinity after two Greek coast guard boats had fired “harassment fire”at them’. Greek Embassy in Ankara didn’t even care to answer and hence it was unclear what caused the shooting.

Not just waterways though, the two countries are locking horns in the air as well.

Just two weeks ago, Turkey’s state-run press had reported that the tracking radar of Greek missile systems in Crete locked onto Turkish F-16 fighter jets, which were flying at an altitude of 10,000 feet west of the Greek islands of Rhodes.

As per Turkey, Turkish F-16s were undergoing a reconnaissance mission in international airspace, and Greece purposely locked in its missiles to scare off Turkish fighter jets. Furthermore, Turkey claimed that four Greek fighters also tried chasing the Turkish jets.

For many years, both the neighbouring nations have been involved in conflicts and tensions have risen recently as both sides accuse one another of violating airspace. Following Russia’s war in Ukraine, Greek authorities have expressed concerns about the possibility of another conflict breaking out in Europe.

It is further reported that it was the radars of Russia’s S-300 system on Crete Island that locked onto Turkish F-16 fighter jets flying at an altitude of 10,000 feet. Greece has even refused to support Ukraine against Russia in the ongoing war.

Greece defence minister Nikos Panagiotopoulos stated, “We will not provide anti-aircraft missiles from our islands or anti-ship missiles to Ukraine, no matter how much they ask us to do so, because we face a real threat”

In the Ukraine war also, the Greek shipping industry has come to Russia’s rescue only. Reuters, in May, reported how Greece shipping companies aided Russia amid sanctions and emerged as the biggest facilitator for Russian ship-to-ship fuel oil exports. A recent report by the Institute of International Finance (IIF), revealed that Russian oil shipments reached their highest-ever level in August. Greece, thus, overtly helped Russia evade Western sanctions.

The recent skirmishes have proven that Greece is ready to take on Turkey. The country, which has been resisting Ankara for years, is suddenly prepared to fight tooth and nail. That’s some quick bravery there.

Now the question arises, why and how? Well, given that Greece and Russia currently recognize Turkey as one of the major thorns, it is quite likely that the deployment of the S-300 was done in accordance with Russia.

Recep Tayyip Erdogan, the president of Turkey, vehemently endorsed Ukraine’s claim to Crimea and condemned Russia’s incursion as unlawful. Furthermore, Ankara attempted to heckle Moscow by refusing to acknowledge Donetsk and Luhansk as separate regions. Turkey’s cunning and vile behaviour around the world were sufficient reasons to trigger mighty nations like Russia.

The further emboldening of Greece is a result of Moscow’s support for the nation.

Also Read: EU to impose sanctions on Greece just two weeks after it got ‘freedom’

Turkey, which had an ambiguous policy regarding the Ukraine war, is now being circled from all directions. It won’t be hounded by Russia only, Greece and Cyprus might also not like to squander this godsent opportunity.

Now, Vladimir Putin can activate his Syrian Module to tame Erdogan’s itch for Crimea. Putin has already spelt doom for Turkey by uniting Kurdish and Assad’s forces in Syria. Additionally, Russia has deployed its military assets on the Turkish border to check Turkey’s military offensives on Syrian territories.

Secondly, Russia can simply choose to declare the 1936 Montreux Convention illegal, null and void, which can severely hamper Turkey’s control over the Bosporus and Dardanelles Straits. Under the treaty, Turkey gets to control the flow of military vessels and warships through the straits.

Turkey being a NATO member country, has long acted against Russia’s interests. By delegitimizing the 1936 Montreux Convention, Moscow can simply flood the Black Sea and the Mediterranean Sea with its military vessels and warships, and prepare a nice burial for Ankara’s expansionist ambitions.

Read More: Greece and Russia are just one step away from snatching the Turkish straits

Additionally, Turkey will surely look to retaliate against Greece after the firing on the Turkish cargo ship. And if Turkey goes rogue, it will put Ankara on a suicidal trail.

And, Cyprus also has long accused Turkey of undermining its territorial and maritime sovereignty in the Aegean Sea region and most probably it has endured enough now as well.

You see, when it comes to geopolitics and foreign policy, Turkish president Erdogan is all of a doodah. It feels like he’s all over the place. Biting off more than he can chew is his favourite pastime. Now, it is for us to wait and witness how he takes Turkey towards its doom.