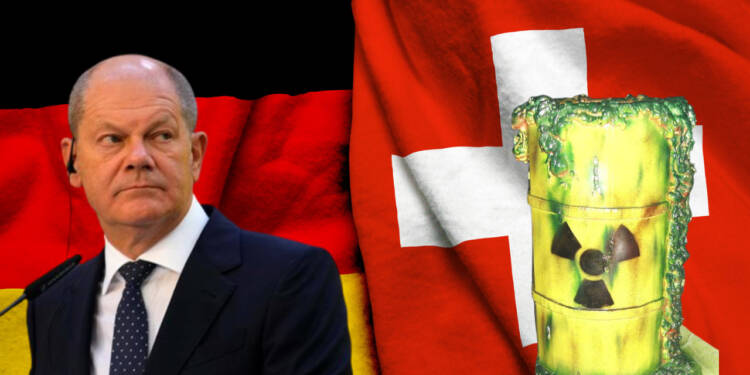 project of the century: Except for one or two, no other nation seems to be happy with Germany nowadays. Firstly it jumped into the Ukraine war, then persuaded others also to do so. Now all of them are in troubled waters, leaving no stone unturned to despise Berlin whenever possible.

It is a well-known fact that Poland has recently done some notorious activities targeting Berlin. However, now, one more nation has targeted Germany purposely. This nation is none other than ‘King Neutral’ Switzerland.

According to Indian Express, Switzerland has announced plans to build a nuclear waste storage facility near its border with Germany, which has reportedly concerned German Authorities.

Project of the century

Switzerland is ready for its “project of the century,” which involves burying spent nuclear fuel deep into the earth in clay, after over 50 years of looking for the best way to store its radioactive waste.

The agency in charge of managing the nation’s radioactive waste announced on Saturday that it chose the Nördlich Lägern region as the best location out of three options for the facility’s subterranean storage.

Reportedly, the National Cooperative for the Disposal of Radioactive Waste (Nagra) spokeswoman Felix Glauser told AFP that authorities “chose Nördlich Lägern as the safest site for a deep geological storage.”

Bern has been generating nuclear waste in its power facilities for more than 50 years. The nation made the decision to progressively phase down nuclear power following the 2011 nuclear accident at the Fukushima nuclear power plant in Japan. For now, its reactors can operate as long as they are safe.

Currently, the waste is being kept in transitory storage in Würenlingen, which is 15.4 miles (29.3 km) from the German border. But now, Switzerland eyes to join a group of nations that are getting close to deep geological storage with the new facility.

However, Berlin is at its Achilles’ heel due to this sudden announcement. Immediately after Bern’s announcement, the German Federal Ministry for the Environment criticized Switzerland’s decision to build a nuclear waste repository right on the border with Germany.

The authorities cited the site’s proximity near the Baden-Württemberg village of Hohentengen, and how it will pose a problem both during the construction phase and during the operation of the repository.

Now, Germany seeks talks with Switzerland for moving the facility away from its border. German communities have reacted skeptically to the siting of the waste site at Nördlich Lägern, which was initially put on hold as a second choice in 2015.

Historically, Switzerland has never been lovesick for Germany. Even after the Ukraine war, Germany has always been in the cross-hairs of Switzerland. However, through this move, it might be safe to conclude that Switzerland authorities eye an act of sweet revenge from Berlin after the closure of Nord Stream 2.

After Germany abruptly canceled the project due to sanctions, the Swiss-based company that was entitled to develop the Nord Stream 2 gas pipeline from Russia to Germany was forced to declare bankruptcy.

The Swiss-based company lost billions on the project. Germany further blocked Switzerland’s use of a shared disposal site for its nuclear waste.

Germany had given a clarion call, it would construct its own final repository for its nuclear waste and not share this with European partners. To be honest, such bossy nature could even trigger a dead horse.

Furthermore, Bern has never genuinely followed Germany’s lead. It initially resisted placing severe sanctions on Russia, afterward sold its gold to the Kremlin in order to earn quick cash, and now it has pledged to turn Germany into a radioactive wasteland. Therefore, the so-called European unity is once more nowhere to be seen in the middle of this.

Tags: EuropeGermanyJapanNord Stream 2Short takesSwitzerlandSwitzerland is ready for its "project of the century
ShareTweetSend
Previous Post