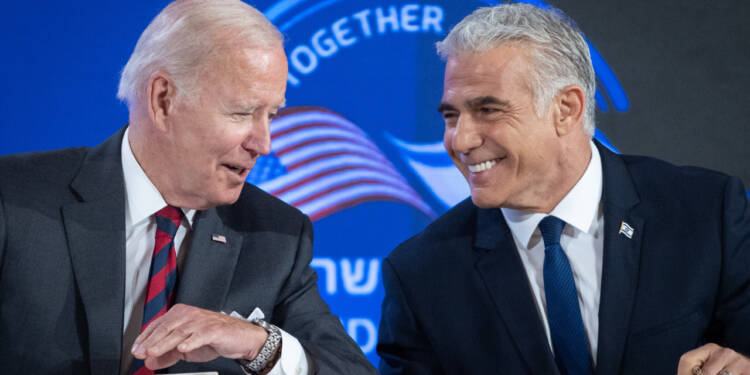 In recent times, Germany and Israel have come at odds with the United States due to their own interests. Berlin is rebuked by US directives and coercive measures on the Ukraine war, while Israel is pissed at the US because of its constant push for the revival of the JCPOA agreement.

A well-known, politically reasonable, proverb states, ‘An enemy’s enemy is a friend.’ Both of these countries have recently made a conscious decision to seriously adopt this paradigm. Furthermore, Israel has made the colossal decision to lock horns with US’ military-industrial complex.

According to Bloomberg, Germany has made a preliminary decision to buy Israel’s Arrow 3 air-defense system instead of the rival product manufactured by US’ Lockheed Martin Corp. Reportedly, the proposal was presented by Israeli counterparts.

Earlier this week, Israeli Prime Minister, Yair Lapid, arrived in Germany for diplomatic talks with German Chancellor, Olaf Scholz. The media simply stated that Mr. Lapid has arrived in Germany to halt the revival of the JCPOA deal, which has become an apple of discord for Iran and Europe, nowadays.

However, the actual purpose of this meeting was something else, and that is now evident. Israel is keen to provide its Arrow 3 interceptor, manufactured by Israel Aerospace Industries.

Arrow 3 is designed to intercept and destroy the newest, longer-range threats, especially those carrying weapons of mass destruction. Reportedly, it would cost around 2 billion euros ($2 billion) to Germany.

No to THAAD Defense

The German government has chosen Israeli-manufactured Arrow 3 over US’ THAAD system manufactured by Lockheed Martin and hence, Israel is as happy as a clam.

While talking to the media, alongside Olaf Scholz, Israeli PM Yair Lapid expressed his gratitude to Germany and said: “Israel … will play a huge part in building Germany’s new defense force, mainly in the field of air defense, it has to do with our total commitment to the safety of Germany, to the safety of Europe, to the ability of liberal democracies to defend themselves,”

If such a sale occurs, it will mark Israel’s first export of the Arrow to any nation. This would also boost the prospects of Israel in defense exports as it will encourage other countries interested in integrating air defense with Berlin to also buy such systems in Europe.

Israel is now looking to play a big role in the EU’s most anticipated Air defense system. Germany has long advocated for the development of a European air defense system that would not only be more effective and affordable but also crucial for bolstering the defense infrastructure across Europe.

However, this means a clarion rejection to the USA which has long been a bosom friend of Brusells for defense exports.

NATO’s attempt in Ukraine had already come to a cropper, and Germany had already made plans to leave the US nuclear umbrella. But now, Berlin is looking to sign new agreements with Israel as a move to improve its chances of creating a military alliance akin to NATO.

EU’s own defense alliance, which has long been a sore subject in Europe is finally getting its wings from Israel.

Read More: Smaller EU nations unite against Germany to prevent it from poaching their gas supplies

Lapid is literally flattening US’ multi-billion arms empire brick by brick. According to Jerusalem, several European nations are also actively negotiating about technologies that can improve their power to defend themselves against Russian missiles with the Israeli defense ministry and defence industry.

This demonstrates unequivocally that the competition for US monopoly in the defense sector is growing seemingly. Earlier, it was France that was giving a tough fight to US’ defense industry. But now, Israel is possibly next in line.