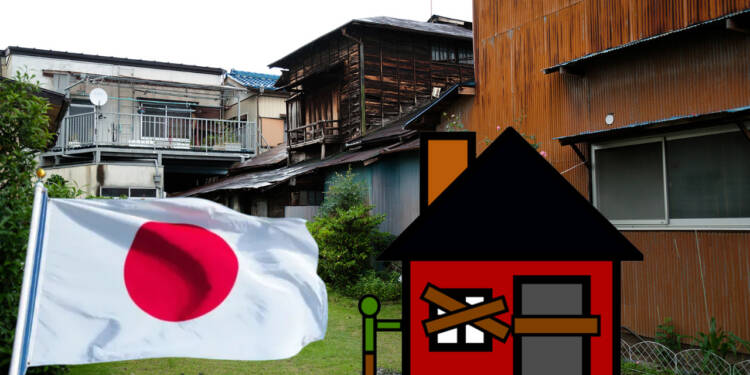 Japan has been a prime example of the power of a nation that knows how to fight. The Japanese are a tough breed and we have witnessed it time and again throughout history. All thanks to the will of the hard-working people of Japan, the nation witnessed miraculous economic recovery after its defeat in the second world war.

However, sometimes slow growth is the best growth. There are limitations to what a pacifist nation with limited resources and unfavorable demographics could achieve. Still, Tokyo remained the second largest economy in the world only behind the US, owing to its real estate and stock market growth, before it was ousted by the Chinese almost a decade ago.

Japan will likely see an excess supply of 10 million dwelling units in 2023, due partly to government housing policy through the 2000s that ignored falling demand caused by a shrinking population.

Well, this is not the first time Japan is on the verge of a real estate crisis. Japan’s equity and real estate bubbles burst starting in the fall of 1989. Equity values plunged 60% from late 1989 to August 1992, while land values dropped throughout the 1990s, falling an incredible 70% by 2001.

The highly inflated Japanese stock market witnessed the plunging of its shares in 1989. The Bank of Japan knew that its real estate market was also overvalued and to stop the rise the bank began quashing the supply of money so as to hike the interest rates so that the real estate prices normalize.

Read More: Japan has shunned its pacifism very openly and China needs to be extremely scared of it

This led to deflation, which further developed into a liquidity trap where low-interest rates become ineffective. People and investors don’t spend or invest. They believe goods and services will be cheaper tomorrow, so they wait to consume, thinking they can earn a better return by sitting on their money versus investing it.

The Bank of Japan tried to pump money into the economy by buying government bonds. This was done to motivate the people to invest more and for banks to lend more. However, as banks got hold of additional capital, they resisted lending it out so as to cover the losses made earlier which gave birth to a credit crunch.

The whole mismanagement of funds by subsequent governments coupled with poor policies led to the stagnation of the Japanese economy which has failed to recover since then.

History is about to repeat itself

Ever since the end of World War II until the 1960s, Japan experienced a severe housing shortage, which led to the government passing legislation to encourage homebuilding. As a result, the housing shortage was over by 1973, but through the 2000s, new homes were still being built at a rate of over 1 million per year.

The rapid housing development was the need of the hour for the Japanese in the past. Understandably, this particular industry is very vital for Tokyo to compensate for its lack of resources. However, the government supposedly ignored the threshold and allowed an economical bubble to build up behind the shadow of its sophisticated technology and US-backed trust.

Read More: Fumio Kishida will go down in history as one of the worst Japanese Prime Ministers

Well, what’s shocking is that the new governments are wholeheartedly gearing up for another crisis. According to the Ministry of Internal Affairs and Communications, Japan had a total of 62.41 million dwelling units as of 2018. Nomura Research Institute expects the number will increase to as many as 65.46 million in 2023.

It seems like Tokyo has failed to learn from its mistakes and has not endeavored to diversify its businesses. Japan could have parted from Pacifism and developed a export based military complex to develop new money-making ventures, but what it actually did was to stick with old-school real estate.

The government motivated the private sector to push more and more into the housing market despite declining population and successfully struck considerable capital which could have been used otherwise.