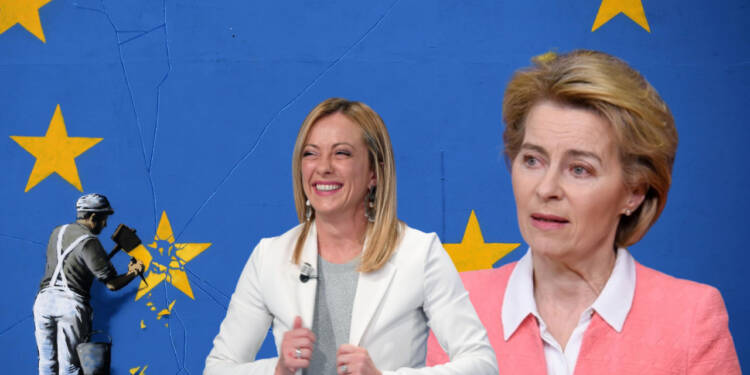 Prior to the general elections, a full-fledged campaign is currently ongoing in Italy. If the opinion polls are to be believed, a right-wing coalition led by Giorgia Meloni’s Brothers of Italy is expected to win by a 20% lead over the centre-left coalition, led by Enrico Letta’s Democratic Party.

Consequently, the right-wing alliance is likely to secure a 2/3rd majority in both houses. As the campaign carries on, Giorgia Meloni has given a stark warning to European Union.

According to Euractiv, Italy’s most preferred Prime Ministerial candidate, Giorgia Meloni has stated, “if I win, for Brussels, the fun is over,”.

Giorgia Meloni, the leader of the Brothers of Italy, declared during a rally that she would not permit EU diktats to be imposed on Italy.

Reportedly, Meloni has stressed: “The “big matters” and “the issues closest to the lives of individuals” should be handled by member states, not the EU.” According to Meloni, the EU should be a political giant rather than a bureaucratic one.

A Hardline opposer of Brussels

Giorgia Meloni even raised concerns over the hypocrisy of Germany in the Ukraine war. Giorgia Meloni chastised: “Just Germany doesn’t want to put a cap on the price of gas because it has contracts with Russia’s Gazprom, and it doesn’t suit it. No one is complaining about it because German Chancellor Olaf Scholz is a socialist.”

If one remembers correctly, Meloni has previously referred to the euro as the “wrong currency” and even gushed about her admiration for Viktor Orban of Hungary and Marine Le Pen of France. So, you can bet dollars to doughnuts that Meloni is not a Pro-EU leader at all.

Once she assumes office, Italy and Brussels will undoubtedly clash.

Furthermore, her rise in Italy is also nearly identical to the ascendancy of the right wing in Poland and Hungary. Law and Justice (PiS) in Poland and Fidesz in Hungary were once nothing in Europe, and now they have become one of the most important critics of Brussels. Now, Italy is heading the same way.

Solidification of the Right-block or Collapse of EU

The fear in Brussels is undoubtedly enormous, Italy might soon turn rogue and Giorgia Meloni might pave the way for the solidification of the right-wing faction in the EU.

Poland had eyed to create a new block within the EU which is anticipated to include like-minded countries like Romania and Bulgaria, through which it can challenge the bigger powers in the European Union. Whereas, there are also growing calls for Italexit in Italy.

Make no mistake, the Brothers of Italy and the Polish Law and Justice party are allies in the European Parliament, and Orbán and Giorgia Meloni profess passionate reciprocal sympathy. All these nations which currently are led by conservative leaders are eyeing to keep themselves out of the EU.

Meloni, though, has never openly stated that Italexit is necessary. But, through her recent statements, it looks like she is no great fan of Brussels and once she storms into Chigi Palace she won’t be tolerating the EU’s dictatorship. What if she changes her mind regarding Italexit? That will be the moment where Brussels needs to be on the qui vive.

Meloni’s rise to power is simply a read-the-riot act for Brussels. Many more governments are going to fall like house of cards in this wave of conservatism. So, dear Brussels, get ready for a roller-coaster ride.