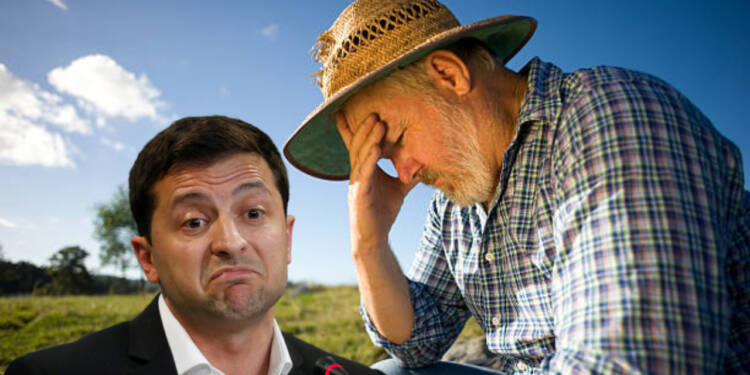 Some of the European nations are having to pay extraordinary penalties for their support to Ukraine. It’s not that the leaders of NATO member states in Europe are stupid, but they are just being squashed in owing to their old alliances with the US.

Once prosperous European nations like the UK, Germany, France, Italy and many more are now struggling domestically as they had to unwillingly back Biden’s war in Ukraine. The European continent is under the grip of record high food and energy inflation owing to disrupted supply routes and if it weren’t enough, Zelensky has now come for European farmers.

An influx of cheap Ukrainian grain and poultry is making it difficult for farmers in the European Union to break even, according to a report published by the Wall Street Journal on Friday.

Shockingly, the grain-starved nations in Africa that were meant to gain from the deal negotiated by the UN to guarantee the safe travel of cereals and sunflower oil from Ukraine’s Black Sea ports are not receiving the food they so urgently need.

You see, the international organizations so blatantly blamed the Russians in the initial days of the war for having blocked essential food supplies. The Kremlin, contrary to what was being said about it, assisted the UN in organizing the safe transport of the commodities. Still, the Zelensky regime transported the commodities to rich European nations, rather than poor African nations.

Ukraine reportedly did so to solidify European support in the war. One might wonder why the Ukrainian produce is available at much cheaper rates despite it incurring additional transport cost.

The European Commission has reportedly removed tariffs and quotas to allow Kyiv to export its grains over land and from European ports amid the conflict with Russia.

Ukrainian farmers are also exempted from adhering to the same environmental regulations as their EU counterparts.

French poultry farmers have made similar complaints, noting that chicken imports from Ukraine have more than doubled in the first half of 2022 and urging the EU not to renew the tariff-cancellation agreement. Apart from pricing out local farmers’ wares, Ukrainian cargoes are also taking up needed space at the ports, Cristian Gavrila of Romanian trade organization PRO AGRO told the WSJ.

The pace of grain exports from Ukraine jumped 66% last month as the UN oversaw a deal to ensure safe passage out of the Black Sea, the American daily noted. Zelensky is on a sympathy spree all around the world and is gathering all the support he can. He is working on a continuous weapon supply from the west which he claims would be used in the war but in actuality are sold in the black market and are used by terrorist outfits to spread violence in Africa and the middle east.

Even if one could ignore Zelensky’s attempt to square off profits for himself, the European leaders’ naiveness is hurting the farmers and that is something that is unacceptable.