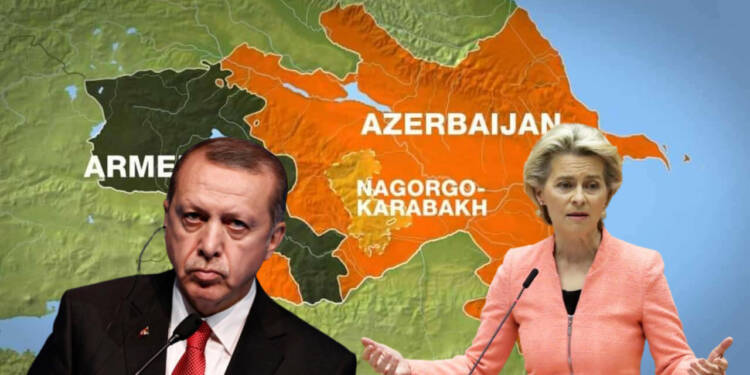 The US and its allies in Europe seem to be very happy at the fact that a possibility of discontent between Armenia and Russia is now on the cards. However, it seems like the western media has failed to take into account the historic developments in the region. Developments so horrific that the Armenians would rather annihilate themselves before siding with the Azeris.

Armenia’s Prime Minister Nikol Pashinyan discussed the escalation in tensions on the Armenian-Azerbaijani border with the European Union’s Charles Michel on Tuesday.

In the call, Armenia blamed Azerbaijan for escalating tensions over the disputed Nagorno-Karabakh territory. Both Baku and Yerevan blame each other for a flare-up of hostilities overnight.

Read More: The Armenia-Azerbaijan tensions are flaring up again as soon as EU chimed in

Russia’s reported failure to take action against Azerbaijan in the recent clash between Armenia and Azerbaijan has naturally upset the Armenians who are now protesting against Armenia’s membership in the CSTO.

The demonstrators say CSTO, of which Armenia is a member, has not come to the aid of Armenia following this week’s Azerbaijani attacks along the Armenia-Azerbaijan border.

You see, Azerbaijan and Armenia have been historical rivals owing to Azeris evidenced support to the Turks in the their genocide against the christian Armenain populace. The horrific targeted genocide led to the deaths of over 1.5 million Armenians.

The two countries have already been a part of a full fledged war in 2020 over the disputed region of Nagorno-Karabakh. The war resulted with Azerbaijan’s triumph.

The EU could lose its last hope

The EU is already struggling with gas supplies after Moscow decided to suspend the majority of its energy exports to the EU until EU lifts the sanctions placed on Moscow. Azerbaijan has risen to be a major energy exporter to the continent in the current crisis. Understandably, the supplies might not be enough to quench the thirst of the continent but the EU is scouting all it can in these troubled times.

Now, with the EU cozying up to Azerbaijan’s arch-rival Armenia, the whole deal could blow off and the continent could lose one of its last hopes.

Read More: With Putin’s support, Armenia is all set to thrash Azerbaijan in the larger Greco-Turkic conflict

Also, the point that Russia did not come to Armenia’s aid is baseless. Moscow provided weaponry and logistics support to Armenia during the 2020 conflict and it was Putin that orchestrated the ceasefire in the current conflict by negotiating with Turkey, which supported Azerbaijan with drone support in the 2020 conflict.

Turkey and Azerbaijan have been cultural allies spanning the Ottoman Empire. These were the very groups that wanted to dechristianize the region and that is exactly what was behind Ottoman Empire’s motive to initiate the Armenian genocide.

Therefore, the EU’s newfound love for Armenia would offend both Azerbaijan and Turkey and that could be disastrous for the EU.