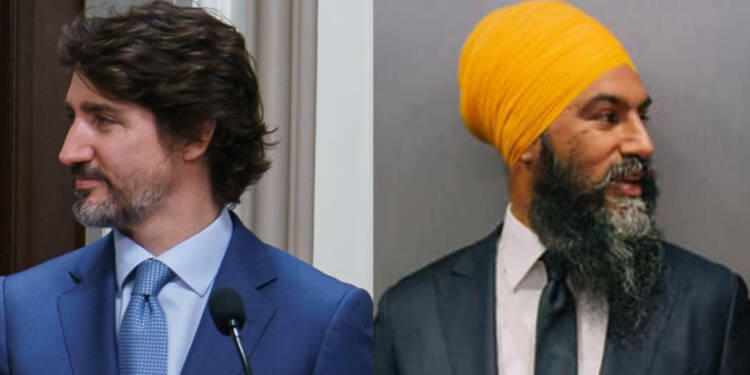 The turbaned political macho of British Columbia- Jagmeet Singh has always been the X-factor behind the stability of the Justin Trudeau-led government of Canada. For years, Jagmeet shared bonhomie with Trudeau, but after things started to get disturbed, Trudeau is now after blood.

In a class act of revenge, Trudeau is now laying a mesh for his pet party’s leader- Jagmeet Singh.

Imagine you walking on Vancouver streets. You happen to step upon a crucial document that contains information worthy of putting the mayor of your city behind the bars. You then go on posting the documents on your twitter handle in a show of a critical discovery you just made. Well scripted story, isn’t it?

Certainly, this is an event of subtle probabilities, but since it was intentionally orchestrated, it did materialise in the streets of Vancouver. Recently, a Vancouver resident Stanley Woodvine, who is an author by profession, tweeted an image of the document allegedly discovered outside of a No Frills on West Broadway St.

The spreadsheet that was dropped on a Vancouver sidewalk appears to have details of political donations, which could be linked to Mayor Kennedy Stewart, who has his affiliation to Jagmeet’s Federal NDP. However, the donations in the spreadsheet stand in violation of election laws.

“The names absolutely jumped off the page at me because they were developers that everyone in Vancouver knows,” Woodvine told CityNews.

Donors listed on the printed spreadsheet allegedly include millionaire developers and the owner of the Vancouver Canucks besides some hefty donations well above Elections BC’s $1,250 limit per political party.

“Francesco Aquilini’s donation behind his name was, I believe, $64,000,” said Woodvine.

Now, the Elections BC has come into action and started investigating the spreadsheet.

BC is set to hold its municipal elections on Saturday, October 15.

Stewart’s team has since stated that it cannot confirm the spreadsheet and that they are “actively fundraising.”

“Like all campaigns, Forward Together is actively fundraising. We follow all Elections B.C. rules. In August, we were the first campaign to publicly disclose our donor list and will do so again before election day,” said Forward Together manager Mark Hosak.

But, can you sense something fishy here? What is this coincidence? A crucial spreadsheet dropped on a sidewalk which was later caught by an author. Don’t you think it was intentionally leaked?

You see, the NDP a few weeks back was up in arms against the scrapped agreement with Trudeau’s Liberal party. Federal NDP leader Jagmeet Singh recently announced he will take back his support given to Justin Trudeau’s Liberal Party if the Canadian PM fails to fulfil Singh’s pet project demand.

According to NDP Leader Jagmeet Singh, if Prime Minister Justin Trudeau fails to implement the socialised dental care program by the end of the year, the NDP would have no choice but to cancel their Confidence and Supply agreement signed between them, which might lead to another election.

Furthermore, many NDP members have begun to criticise the federal government, claiming that Trudeau has only been concerned with regulating the internet, stopping law-abiding citizens from acquiring weapons, causing Singh’s pet project to be abandoned.

In March, Jagmeet Singh had made a deal with Justin Trudeau that could help Canadians get a dental care program. In this deal, the New Democrats vowed to support Trudeau’s Federal government in power until 2025 if certain conditions were met. But, all of a sudden, the NDP wanted to part ways and bid adieu to Justin Pierre James Trudeau.

Read More: The Trudeau government can fall any moment now

Jagmeet in a show of his political stature to Trudeau has resorted to scrap the agreement between the two parties. Which led Trudeau to respond through a spreadsheet. The spreadsheet coming into the hands of an author can be no coincidence. It was certainly leaked. It is quite clear that Trudeau is giving an ultimatum to Jagmeet Singh-led NDP- ‘if you prove to be a catalyst to my downfall, I will leak your secrets that can dedicate your life in the gallows.”