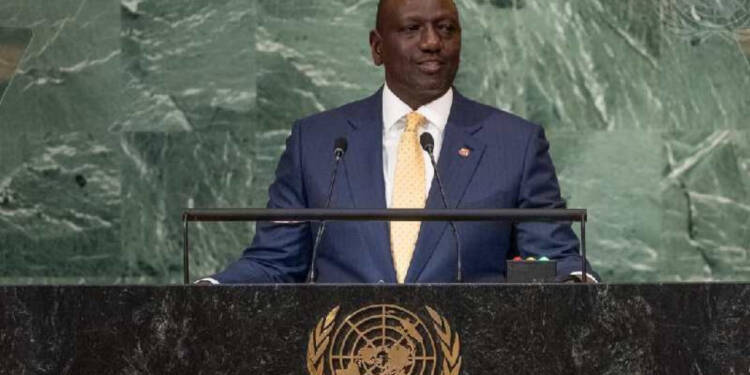 At the United Nations General Assembly session, Kenya’s president William Ruto said during his speech that the biggest polluters of the planet suffer the least consequences of climate change whereas nations which contribute the least to climate change suffer the most from the repercussions. Dr. Ruto also went on to address the economic conditions of African states, calling on the World Bank and International Monetary Fund to provide post-pandemic debt relief to the heavily-indebted countries.

When it comes to climate change, we all are aware of the virtue signalling that the US, European Union and the UN do. Every year, there are meetings in New York at the UN headquarters where world leaders arrive via their private charter and motorcade to discuss the harmful effects of climate change. There are dramatic speeches, a lot of virtue signalling, series of monotonous lectures and performances on the “climate emergency” by heads of states who live in palaces and travel in AC vehicles. Whereas, countries in Africa and Asia are villanised and blamed in such meetings for not listening to their Western masters and exercising their own discretion when it comes to the economic development of their nations.

Read more: Kenya can very well build its own Silicon Valley, but it must kick out Western poachers first

The biggest irony here is that, leaders of the nations who contributed the highest to the degradation of the environment speak about the harmful effects of climate change.  The amount of resources wasted in organising these international summits, meetings, conferences, seminars, etc can actually be used in the third-world countries to build such infrastructure which will help in better adapting to changing climate. Unfortunately, that is never going to happen as these so-called superpowers want to humiliate smaller states at the global level and bully them for taking decisions on their own.

The West thinks it is educated, informed and civilised, if that is really the case then it would have realised that it has been, and is the biggest polluter of the earth and violator of environmental laws. William Ruto called out the two-faced agenda of the US and EU which is making African and Asian countries feel guilty in the name of climate emergency so that those nations don’t undertake developmental projects and hence rely on the superpowers.

The US signs MoUs/agreements with poor countries and promises them industrial growth, infrastructure investment, advanced technology, etc and on the other hand, the same US blames them at the UN for causing the climate crisis. The expectation from poor countries to pursue “a green future” comes from the same west whose eyes have always been on Africa’s mineral resources. African countries rely heavily on superpowers which exert influence over their internal affairs and prevent them from taking independent decisions which will eventually benefit them in the long run.

If the West believes everyone has to do their part in the battle against climate change and the pursuit of a clean future, it must start with itself first. If poor states have to pay the price for contributing to the rise of global warming then so do the European Union and the US whose levels of pollution are much higher than Asia and Africa. One of the biggest problems with the West is that it blames everyone but itself. Despite having the resources, technology, manpower strategy, methods and knowledge needed to deal with the climate crisis, the West refuses to address this issue for long.

Let’s be honest, climate change is a real thing and needs to be taken seriously. Every state irrespective of rich and poor has a share in the responsibility to combat global warming, however, if the entire burden is put on smaller states, then it becomes the issue. The entitlement to lecture poor states that they are not doing anything in response to climate change represents a colonial mindset which the west still has. The US and EU need to understand that it is going to take time for Africa and Asia to set their economies and models of development in line with the environmental norms created by the First World.