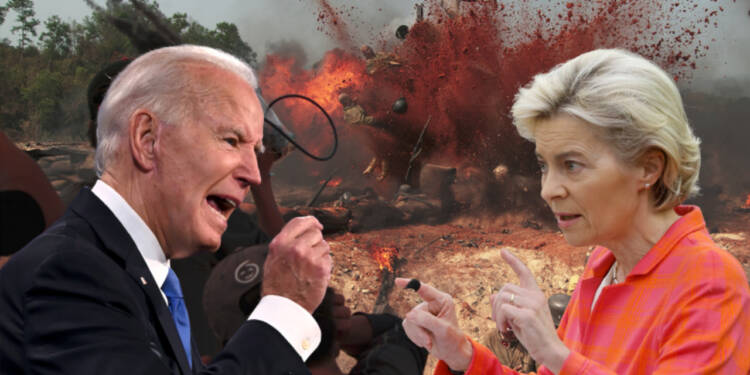 The Biden administration has set the cat among the pigeons by sabotaging the Nord Stream 1 and 2 pipelines. In Europe, it has sparked an anti-US movement. For instance, the German internet is inundated with anti-US posts in the aftermath of the pipeline explosions.

Germans up in arms against the US

Recently, the Germans were seen trending the “Sanctions against the US” hashtag on Twitter. The anger among the Germans against US is real. And it’s obvious too! The American attack on the Russia-operated pipelines has seriously jeopardized Europe’s energy security.

Moreover, the bombing of the pipelines has also made Europe heavily dependent on US LNG imports. US LNG is unreasonably costlier than the natural gas imported through pipelines. At a time when Europe is already grappling with soaring inflation, importing LNG from US is not considered a preferred option. All in all, the sabotage of the pipelines is terrible news for European economies.

So, it looks like three European nations have vowed to bring justice to the Europeans. Reuters on September 30 reported that the government of Sweden, Denmark and Germany have joined hands to investigate the matter. Magdalena Andersson, Swedish Prime Minister told a press conference, “It is, of course, important to establish what has happened, the cause of the leaks. We have today agreed that the police authorities in Sweden, Denmark and Germany should cooperate in order to clarify what has happened.”

Read More: As Russia plans to launch its own space station, Biden hits the panic button

The PM further said, “Swedish police will cooperate with Danish and German counterparts to investigate what caused the explosions on the two gas pipelines in the Baltic Sea.” Now, if an honest investigation takes place into the bombing of the Russian pipelines, USA might really see itself landing on a hot tin roof.

For Germany, finding the real culprit behind the attacks is of extreme significance. The German economy is on ventilator support, and the economic crisis may even spur a political crisis in the country. So, Olaf is in a precarious position. He urgently needs to find the main culprit and punish it, be it the US or UK.

EU and US to become permanent enemies

The fact of the matter is that the pipeline attack fiasco can permanently render US-Europe ties defunct. European nations are realizing that stripping Europe of its economic prosperity and fuelling USA’s economic growth at the expense of EU is the ultimate objective of the Ukraine war. The results of the war are already visible. On one hand, US has become the top LNG exporter to Europe. On the other, US is also shamefully enticing crisis-ridden European companies into shifting their businesses to US, where the business environment remains comparatively less hostile.

As some geopolitical analysts see it, the pipeline attack might look like a strategic masterstroke on Biden’s part. However, its long-term implications are disastrous for US-Europe relations.

The Nord Stream episode will sow the seeds of discord between the two powers. And once the Nord Stream Pipelines go online again, Europe will simply shift back to the energy trade with Russia.

Through sabotaging Nord Stream pipelines, Biden has achieved what Putin could not achieve over the last two decades. For the first time, anti-US sentiments are spreading in Europe like wildfire, and Putin is going to gain the most out of it. So, once the Ukraine war is over, US and EU will not be seeing eye to eye on the Russian question. EU will prefer Russia above the US, and Biden will be left with no other option than whining in pain.