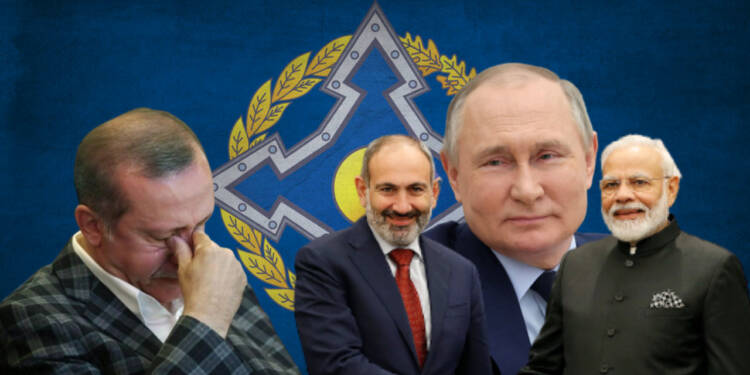 New Delhi has shown tremendous potential in the last decade under the Modi administration. India is rapidly growing as one of the world’s major arms exporters, and its alliance with Moscow highlights mutual benefits for both nations.

Russia has possibly seen India as a reliable partner who could be trusted, unlike China, to exert Moscow’s interests in Asia. New Delhi, however, is a neutral party and likes to balance its stance between the US and Russia, but could now have a stronger tendency to glide towards Moscow after Washington recently approved the sale of F16s to Islamabad. India has reportedly signed a $250 million deal to export arms and ammunition to Armenia, which has historically been at odds with Azerbaijan.

India will be sending indigenously developed multi-barrel Pinaka launchers, anti-tank rockets, and a range of other ammunition to the former Soviet region. Armenia and Azerbaijan share tense relations owing to the events of the Armenian genocide, during which Turkey, with Azeri support, orchestrated mass killings of Armenian Christians.

Read more: Why the West’s appeasement of Armenia will fail and end up antagonizing Turkey and Azerbaijan

The two countries have also been a part of a full-fledged war in 2020 over the disputed region of Nagorno-Karabakh. Azerbaijan, the triumphant party in the war, was backed by Turkey, whereas Armenia, which is a part of the CSTO alliance headed by Russia, only received weaponry and logistics support from Moscow.

The loss demotivated the Armenian populace, and soon the opposition parties in Armenia, in line with the popular sentiment, started demanding the government pull out of Armenia from the CSTO.

Moreover, the Armenian populace sees Russia as a friend and expects to fight in the defense of fellow Christians. In reality, it was Russia that helped establish a ceasefire. However, the West was successful in sowing an anti-Russia sentiment among the Armenians.

A recent clash between Azerbaijan and Armenia itched the old wound and brought back the anti-Russian voices in Armenia. Looking at an eventual breakup of the CSTO, Putin could have asked its old friend India to reaffirm Russia’s hand on Armenia.

As a result, Armenia did not have to buy from sanctions-hit Russia. Moscow very strategically solidified Armenia’s belief in the CSTO through India. It is indeed a very well thought out action by both parties.

You see, both Azerbaijan and Turkey now know that giants like India and Russia are backing Armenia. As a result, they would think twice before acting against Armenia in the future, which would pave the way for a safer CSTO owing to Armenia’s unaltered belief in the alliance. The rise of a more refined and powerful CSTO is now inevitable, all thanks to unaltered support from New Delhi.

Read more: With Putin’s support, Armenia is all set to thrash Azerbaijan in the larger Greco-Turkic conflict

New Delhi already shares the global stage with Moscow via its alliances in the SCO and BRICS. Therefore, it is unlikely that India would endeavour to become a part of the CSTO grouping, which mainly comprises central Asian states. Although India has highlighted Washington, its neutral stance has indicated that New Delhi could get much closer to Russia if Biden continues with his Pro- Pakistan activities. An alliance between New Delhi and Moscow seems to have borne fruit for both nations. A budding eastern bloc is now all set to replace the old order, which is now counting its last days.