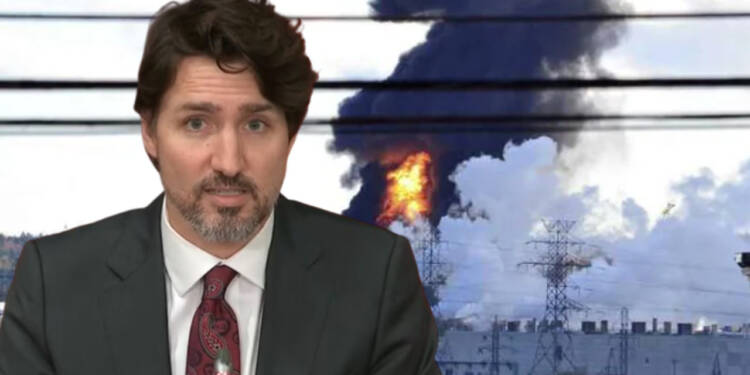 Flames and billowing black smoke can be seen all over Canada. Explosions have shaken the country. Hospitals are seeing an influx of patients. Canadians are grappling with life-threatening injuries and whatnot. But the Prime Minister seems to pay no heed to the matter.

It is often said that hell is a bottomless pit, and Canadian Prime Minister Justin Trudeau is proving this statement. No matter how bad the situation Canada may already be dealing with is, he makes sure to make it even worse. And who faces the heat of Trudeau’s faulty policies? The Canadians.

Canadian provinces are now witnessing another series of miseries. Oil and gas refinery blasts have rocked the country like never before. An unusual and shocking number of explosions have been making headlines across the country in the past few weeks.

The Canadian province of Newfoundland and Labrador saw a fire and an explosion in an oil refinery in the first week of September. According to the Canadian police, eight people were injured before the blaze was contained. All eight people went to the hospital, some with serious injuries said Royal Canadian Mounted Police spokesperson Corporal Jolene Garland. All other employees have been accounted for.

The Braya Renewable Fuels refinery, previously known as Come by Chance, said the incident occurred in the afternoon and that emergency personnel were on the scene but did not provide further details.

Read More: Trudeau transforms into an oil guzzler from being a Green Energy advocate

The refinery is a significant employer in the nearby communities of Arnold’s Cove and Come By Chance. Around 1,200 people live in the two communities as a whole.

Although it had been shut down for more than a year due to the COVID-19 pandemic and falling global oil prices, the refinery produced oil before it was sold in November. The refinery will be renovated to create renewable diesel and sustainable aviation fuel, according to Texas-based private equity firm Cresta Fund Management, which purchased a controlling share in the facility. The facility and its owner have then renamed Braya Renewable Fuels.

Now, such blasts have become a common event in the country. They are even hampering the supply of gas and heating oil. Recently, the province of British Columbia witnessed a blast along a pipeline operated by Canadian company Enbridge in an area near Prince George, about 600 miles northeast of Vancouver, according to an Associated Press news report.

Following the explosion, two pipelines operated by FortisBC that supply 85 per cent of British Columbia’s natural gas were shut off, according to the report.

Moreover, local companies, including two oil refineries, are expected to be impacted due to the explosion that occurred late Tuesday in B.C. Deadly blasts have even led to driving up prices at the pump and have given rise to a situation where refinery capacity is quite tight. Refineries in the country are either down for maintenance or are grappling with deadly blasts.

Werner Antweiler, an economics professor at the University of British Columbia has told CBC, “What we’re seeing right now is a very unusual spike in the refinery margins and that is driven by refineries being offline unexpectedly and, in some cases, due to maintenance … that is actually in multiple locations, so this is really a very unusual situation.”

But, why is all this happening so often now? Why are the issues at multiple refineries not being solved?

You see, experts have said sky-high prices are a motivation to switch from fossil fuel burners to electric or zero-emission vehicles, despite supply issues. And perhaps this is the reason, Trudeau does not wish to address this problem as it would push the EV sector, which is long advocated by The Canadian PM. Perhaps, the “Greenie” is busy pushing his green agenda while ignoring the grave repercussions the country is going through. Oil and gas refineries are the country’s significant employers; if refineries somehow get shut down under Trudeau, it will be a setback for Canadians.

If we just talk about the conservative province of Alberta, since 2015, when the price of oil bottomed out and Trudeau came to office spouting his “green” fairy tales and talking about “phasing out” the oilsands, the province has missed out on about 200 billion dollars in energy investment. Lost investment means tens of thousands of old jobs lost and tens of thousands of new ones never created.

Well, this is just one province.

As one report noted, if you want to know the real-world damage done by Justin Trudeau’s tanker ban, his cancellation of two major pipelines (and his failure to fight for Keystone), his new environmental assessment process that will make future pipelines next to impossible, his government’s resistance to the Frontier oilsands project, and his carbon tax, then consider this: In the past decade, investment in Canada’s oil and gas sector has grown by one percent, while in the US it has grown by over 50 percent.

Trudeau’s diktats of going green have always been frowned upon, but what if he portrays refineries as a dangerous place to work at?