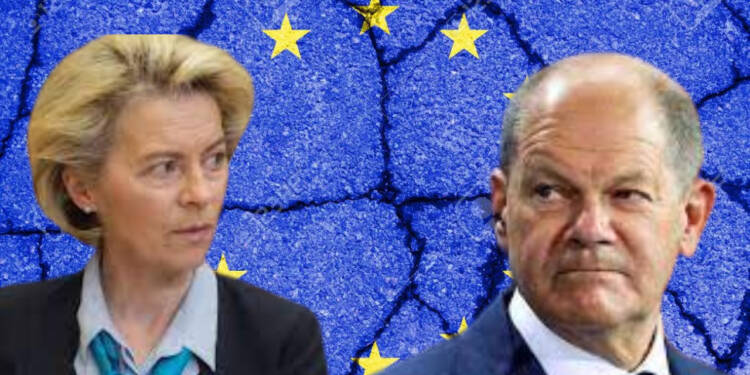 Ten years ago, when the global financial crisis hit Europe, it was Germany that pushed stringent debt laws and acted as a saviour for debt-ridden economies. But, now things are quite different. Last week, Germany introduced a €200 billion package announced to cushion consumers and businesses from the full effects of the energy crisis.

This step is not at all welcomed by its own European Allies. According to EU officials: “Germany has shown a big middle finger to the rest of Europe with €200 billion package, that has raised the temperature with the other countries.”

Berlin is solely to blame for the Eurozone’s current plight; as a result, even countries like France and Italy are not now backing Germany’s position. Brussels, on the other hand, is coming to save the day for Berlin. EU is reportedly working on a strategy that might save Olaf’s face and defuse the criticism for a considerable amount of time.

EU changes laws to save Germany

According to the financial times, as part of a significant revision to the EU’s deficit rules, Brussels intends to offer EU members more time to reduce their debts and make room for public investment.

According to EU officials, the European Commission will present a proposal to amend the Stability and Growth Pact by the end of October, as part of which it will negotiate multiyear plans with national capitals to reduce their debt loads.

The proposals, which have not yet been finalized and are still being considered between the commission and capitals, would streamline the extremely complex fiscal regulations of the EU while tightening enforcement.

Under the new blueprint, the EU wants the EU member state’s public debt burden on a sustainable, downward trajectory, the commission would suggest a four- or five-year plan for that state.

Furthermore, the EU would entitle member states to commit to a series of reforms aimed at strengthening the economy over a more extended period, partly drawing on the recovery blueprints they agreed on as part of the €800bn NextGenerationEU program.

Make no mistake, by solely moving ahead with a €200 billion package, Germany has inserted its hand into a can of worms. EU nations despised Germany like never before. Nations claim that Germany has to act in solidarity with others rather than focusing only on its interests.

As per them, Germans are more concerned about their gas price, but that is not the case for the other 26 countries.

Immediately after Germany’s announcement, Brussels took cognizance of the matter and asked other nations to coordinate their rescue measures and avoid undermining the single market. Reportedly, the EU stressed: “Actions taken at the national level have important spillovers on other member states, so a coordinated approach at the European level is more crucial than ever,”

EU has always fallen short of saying these things to Germany, but, has always advised others to do such measures. That’s cute!! So, one could easily predict that Brussels which usually works under the diktats of Germany is again working to save Berlin from getting chastised.

With a longer time to pay off debt and more instruments and assistance from the EU, Brussels is currently drafting a plan that, in all honesty, might win over everyone.

Read More: Germany’s economic minister makes it clear that Russia is a far better energy partner than the US

Germany is trying to pull a sea change, it is now flouting and changing EU rules as per its need to obtain a €200 billion package loan for itself since it anticipates obstacles from other EU countries in shortly near future. But, a massive alarm is undoubtedly ringing for Eurozone, stay away from this new trap.