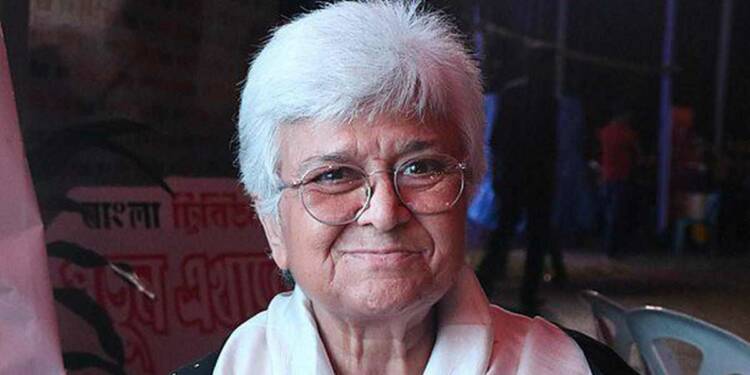 Kamla Bhasin was an Indian developmental feminist activist, poet, author and social scientist. She was born on 24 April 1946 and died on 25 September 2021. Bhasin’s work, that began in 1970, focused on gender education, human development and the media. In this article we are going to talk about the biography, career, notable works, and family of Kamla Bhasin so read the article till the end.

She lived in New Delhi, India. She was best known for her work with Sangat – A Feminist Network and for her poem Kyunki main ladki hoon, mujhe padhna hai. In 1995, she recited a refurbished, feminist version of the popular poem Azadi (Freedom) in a conference. She was also the South Asia coordinator of One Billion Rising.

Kamla Bhasin called herself ‘The Midnight Generation’, a reference to the generation of Indians born around the time of independence, ‘at the stroke of the midnight hour. She was the fourth of six siblings. Her father was a doctor in Rajasthan.

She grew up around villages in India and it helped her form an understanding about women’s issues in villages in India. This experience would be instrumental in her life and future career. She went to a government university for her bachelor’s and masters’. She later said that she found the experience uninspiring and graduated with second division.

Kamla Bhasin met her (ex) husband in Rajasthan while working for Seva Mandir. She had later recounted that her husband was an incredibly feminist man and espoused progressive ideas. Her husband suggested that their children take both their surnames and was supportive when Bhasin’s 70-year-old mother moved in with them. However, things turned sour after incidents of domestic abuse and infidelity by him.

She considered her greatest loss to be the death of her adult daughter who was really important to her. She had a son who became disabled after a vaccine reacted badly.

Kamla Bhasin completed her M.A. from Rajasthan University and then went on to study Sociology of Development at University of Munster in West Germany with a fellowship. Afterward, she taught at the Orientation Centre of the German Foundation for Developing Countries in Bad Honnef for around a year.

She then wanted to return to India, and implement what she learned there. Hence, she started working for Seva Mandir, which works primarily in natural resource sustainability. There she learnt about how caste is endemic in Indian society, and how discrimination manifests itself even in governance.

That was manifest in the fact that Brahmin’s wells would never go dry as they received state funds to drill every year. This was when she realized that caste and feminism were intersectional.

After that, she started working with the Food and Agriculture Organization, and was assigned to identify innovative development work in Asian countries and create networks between people –across countries.

Kamla Bhasin lamented later that at that time, in the 70s when the subcontinent was gripped in mutual animosity and war, it was difficult to create networks and come together as South Asians. She thus, moved to Bangladesh in 1976 and worked with Gonoshasthaya Kendra, a rural public health organization.

It was where she met Zafrullah Chowdhury, a Bangladeshi public health worker and activist, who changed her perspective about a lot of things. She later described him as one of the few men who thought ‘out of the box’ in South Asia. She resigned from her job at the U.N. in 2002, to work with Sangat, of which she was a founder member and adviser.

We hope this biography article of Kamla Bhasin will be helpful for you to understand her journey and works.