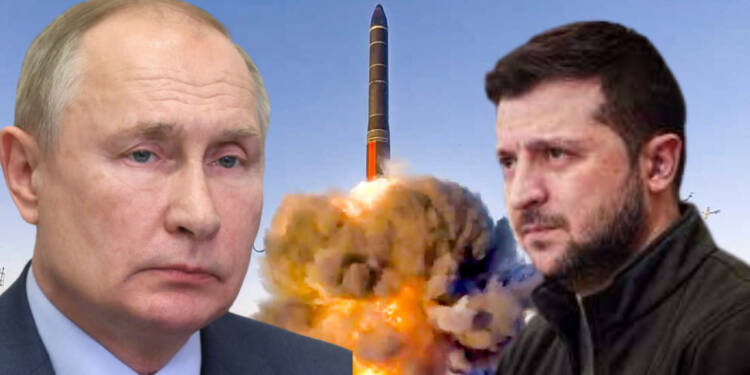 Russian nuclear military train: The war in Ukraine is now becoming abominable. Sadly, the two sides are now becoming monsters of the modern era as the end of this nightmare continues to be nowhere in sight.

Following the referendum, Russia insists that it has successfully liberated the conflicted regions. Zelensky, though, is not yet prepared to accept the reality. Along with him, the west is doing everything it can to prolong the war.

Now, some recent reports from the front lines are somewhat distressing. Russia is currently testing the waters to determine whether or not a nuclear trigger could help it achieve its goal of triumph. But, this could be a nightmare for NATO.

Russia is now preparing a setup (Russian nuclear military train) that could be a red zone for Ukraine. According to the Telegraph, a Russian convoy operated by the secretive nuclear division and linked to the 12th main directorate of the Russian ministry of defence has been spotted in central Russia.

The convoy (Russian nuclear military train) is believed to be heading towards the front line in Ukraine. If the reports are accurate, Russia is actually preparing a nuclear test to send a ‘signal to the West’. The first video of the convoy was first uploaded on a pro-Russian Telegram channel Rybar.

Take this with a grain of salt but, Russia appears to be mad as a hatter and it is unquestionably eyeing doing something Nuclear on the frontlines of the Ukraine war.

Just a few days ago, NATO intelligence had raised an alarm that Russia is anticipated to test its nuclear-capable torpedo drone Poseidon, potentially in the Black Sea. The torpedo is also known as the “weapon of the apocalypse,” and now, this report has started to circulate on Global media.

Beyond any shadow of uncertainty, the world would be standing at the lion’s den if things continued getting worse. The conflict could ultimately turn nuclear.

But one must realize, why things have reached such a critical point and why the hell Ukraine and Russia can’t sit down at a table and put a stop to this insanity once and for all.

Russia has insisted that the Ukraine issue must be settled through negotiations ever since the beginning of the war. Vladimir Putin, the president of Russia, publicly stated on camera during the SCO Summit a few weeks ago that the country wants the war to end as soon as possible.

Though, Mr Putin stressed that Ukraine is unwilling to negotiate. The Russian President had stressed: “We will do everything to stop this as soon as possible. Only, unfortunately, the opposing side, the leadership of Ukraine, announced its rejection of the negotiation process and stated that it wants to achieve its goals by military means.”

Guess what, Russia here is not actually wrong. As Putin was announcing his intention of negotiations at the SCO summit, Ukraine along with its buddies in the west was vehemently crushing Russian forces once again in Eastern Ukraine.

Additionally, it has frequently been reported that Zelensky despises Putin and aspires to hold peace negotiations with his pipe-dream, the next president of Russia.

With Zelensky, the West is also reiterating the idea that the conflict won’t be over until Russia is torn apart. Therefore, for Russia, when nothing seems to be working. Putin made the decision to call for referendums in Eastern Ukraine and declare an end to the conflict by encircling the regions as the SCO meeting came to a close. However, Ukraine is still attempting to seize control of the disputed region even after the referendum process.

So now, with an ‘anticipated’ nuclear test, Russia is now calling the final shots to end the war in Ukraine.

Read More: Zelensky and Biden were hoping for a coup in Russia, but Putin had other plans in mind

If Russia conducts a nuclear weapon test close to the front lines of the war, the battle would reach a point where there would be no turning back. A no holds barred match between the West and Russia might be fatal and exceedingly bloody for future generations.

The effects of a nuclear war would be a mass grave, a destroyed harvest, and a nightmare in Ukraine. Rounds of negotiations may put an end to the conflict, but neither the West nor Ukraine are prepared to do so, and now, even Russia has a deadly mood.