Somalia has not been able to join EAC despite multiple applications. Reason is, the US 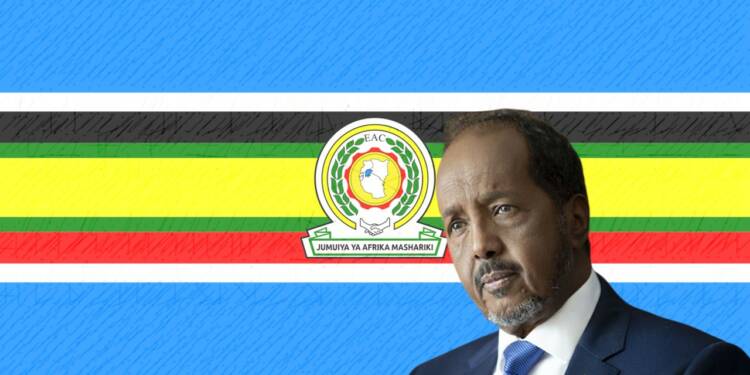 Somalia has relaunched its bid to join the East African Community (EAC), only days after the Democratic Republic of the Congo (DRC Congo) was accepted to the regional trade bloc.

The country’s newly elected President, Hassan Sheikh Mohamud, arrived in Arusha a few days ago to attend the ongoing 22nd Ordinary East African Community Heads of State Summit, possibly to ascertain the inclusion bid that began a decade ago. During the discussion, Mohamud stated that his country is eager to join the EAC and that they are no longer a liability to the organisation.

The EAC and Somalia:

The East African Community (EAC) is an intergovernmental organisation made up of seven East African countries: the Democratic Republic of the Congo, the United Republic of Tanzania, Kenya, Burundi, Rwanda, South Sudan, and Uganda.

Following negotiations with the Southern African Development Community (SADC) and the Common Market for Eastern and Southern Africa (COMESA), the EAC agreed to an extended free trade zone encompassing all three organisations’ member nations in 2008. The EAC is a vital component of the African Economic Community.

Somalia applied to join the EAC nearly a decade ago. The significance of Somalia’s accession to the bloc cannot be neglected. Regional economic blocs, you see, play an important role in the advancement of member countries’ economies. Europe, with its advanced and mechanised economies, established the European Economic Community (EEC) in 1957 with a treaty signed by six countries: France, Belgium, the Netherlands, West Germany, Luxembourg, and Italy. The EEC evolved into the European Union that exists today (EU). Similarly, the East Africa Community represents member states confronted with a slew of developmental challenges stemming from “technological underdevelopment and organisational incompetence.” It should be more natural for the weak to collaborate than it should be for the strong.

Some even see the EAC as an organization built on a bond of common heritage of formerly British colonized English and Kiswahili speaking founding member states of Uganda, Kenya and Tanzania.

Furthermore, an EAC with Somalia as a member would only strengthen the organisation. Somalis share historically rich and diverse common experiences, such as culture and Kiswahili, which can be used to build trust and networks for business and trade with other East Africans. Somalis have contributed to the economic and social transformation of East African cities by investing in local businesses. In the 1990s, many Somalis fleeing anarchy in Somalia settled in Nairobi, transforming East leigh, then a residential suburb of Nairobi, into a bustling business zone. They established a variety of businesses, including export and import networks, as well as malls, lodges, and restaurants.

Admitting Somalia to the East African Community will, preferably, significantly raise the movement of goods, services, and people across the bloc, thereby increasing the bloc’s gross domestic product (GDP) and encouraging the region’s already established Somali businesses. Furthermore, with its long Indian Ocean Red Sea route connecting Africa to the Arabian Peninsula, a significant economic zone, and, by extension, the rest of Asia, Somalia can serve as a gateway to international trade.

Also Read: Somalia sells itself to the US and people are furious

Because of the country’s political instability, Somalia has faced opposition from EAC member countries. Somalia has long been an underserved theatre in the United States’ counterterrorism campaign. Drone strikes in Somalia, military advisors assisting Somali partner forces, or an al-Shabaab attack in the region make headlines from time to time, and then fade away. Furthermore, Al-Shabab extremists in Somalia have recently become “bolder” in their attacks, increasing the use of suicide bombers wearing homemade explosives in what security experts refer to as a “change in tactics.”

Nonetheless, the Biden administration’s support for the Somali government has been inadequate. And there’s a simple explanation for this: growing evidence of links between Iran and Al-east Qaeda’s African branch, Al Shabaab. To be clear, Joe Biden’s reverence for the Iran Nuclear Deal is nauseous. The world has seen how far the US president is willing to go to appease Iran. Biden’s foreign policy has been a disaster for the United States. Even old US allies in the Middle East were overlooked in the rush to court Iran; Somalia is still a relatively smaller ally.

Furthermore, contemporary “progressive” democrats have repeatedly demonstrated, albeit covertly, their allegiance to the Islamic Republic of Iran and Iran-backed terrorists. Remember when US Representative Ilhan Omar went after President Joe Biden for conducting airstrikes against Al-Shabab? Unfortunately, today’s Democratic Party has been hijacked by many Ilhan Omars, something which is reflected in Democratic foreign policy.

To be completely honest, a politically unstable Somalia serves only Biden’s political ends, because a terror-free Somalia would quickly gain EAC membership. And the more potent, EAC will lead to a more influential  African economy. This could be a major source of annoyance for the West. Make no mistake: the United States has long attempted to stymie Africa’s rise. An assertive Africa would never benefit the West. Slavery in Africa laid the groundwork for the wealth of western nations. Somalis should understand the truth: their country has not been able to harness its full potential, and the reason is mainly attributable to the United States.

Massive infighting breaks out in the Liberal party