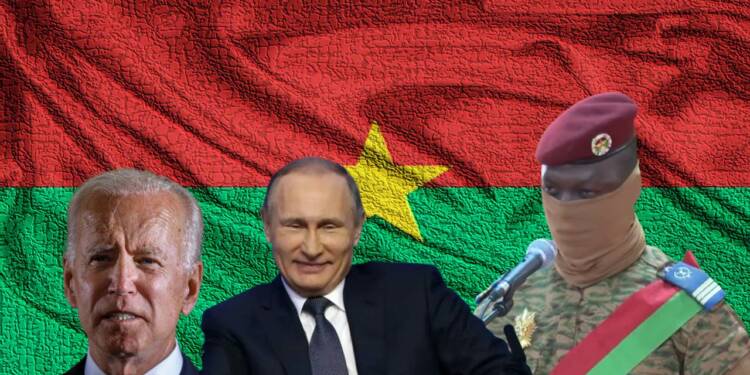 The West’s attempt to hurt the economy of an African country just got unmasked with its sinister motives coming out in the open. The west is so blind in it obsessive fear of losing Africa to its nemesis, that it is willing to cause destruction. What the west doesn’t realise is that the mentality of ‘if not mine, then no one’s’ lacks longevity. The US announced that it will exclude Burkina Faso from its trade agreement with African nations. It stated that the reason for its decision is lack of democracy in the West African nation.

In a letter to the US Congress, President Joe Biden wrote, “I have made this decision because I have determined that the government of Burkina Faso has not established, or made continued progress towards establishing, respect for the rule of law and political pluralism.” Burkina Faso’s exclusion from the agreement will be effective from next year.

The US Trade Ambassador Katherine Tai told “Burkina Faso to make the necessary decisions to meet the terms of the agreement and the return of democracy.” The trade agreement is known as the African Growth and Opportunity Act (AGOA). It provides duty-free access to the US market for 1,800 African goods. African states can benefit from it, provided they have a good record on human rights, democracy etc.

Recently, US under Secretary for Political Affairs, Victoria Nuland, was on a four-day visit to the Sahel region. After her meeting with the ruling junta leader of Burkina Faso, Ibrahim Traore, she told the media that he had assured her that he will not invite the Russian mercenary group- The Wagner like his neighbours. She said, “We had a chance to sit with interim President Traore and his leadership team, including his defence minister. He was unequivocal in saying that only Burkinabe will defend their country. They have no intention of inviting Wagner.”

Now, we at TFI explained how the West’s dominance over the Sahel region, which comprises Mali, Niger, Burkina Faso etc, has diminished over the years. France deployed its forces under Operation Barkhane to do away with Islamist groups destroying the region but it all ended up in an outright catastrophe with French military leaving Mali and Mali leaving the West-backed military alliance G5 Sahel. After Mali’s exit, other countries also expressed their disappointment and frustration over the failure of the West in attaining peace in the Sahel region. While nations like Niger criticised G5 for being incompetent, Mali invited Russia’s Wagner Group to battle the terrorists and insurgents who have been wreaking havoc for years. Similarly, reports and intel have confirmed that the anger and resentment in West Africa against the US and Europe had a domino effect on Burkina Faso whose former leader Colonel Damiba also decided to invite Wagner Group in his territory for the same purpose. This development angered the West, which saw its mission failing.

Read more: A nation is as civilized as its Police is and Kenya is making sure of it

Last month, there was another military coup in Burkina Faso when an army captain named Ibrahim Traore overthrew the regime of Damiba citing his failure to neutralise the country. Within nine months, the West African state witnessed another significant political crisis. After establishing a transitional government and taking the seat as the president, Traore didn’t disclose his foreign policy strategy.

However, some analysts said it is likely that Traore will seek the assistance of the Russian mercenary group in eliminating the Islamist groups operating in the country. In fact, soon after the coup, there was a demonstration by locals in Burkina Faso in support of Russia. Many waved Russian flags, raised slogans in support of it, condemned France and called on it to leave their land.

Similarly, Wagner’s founder Yevgeny Prigozhin, who is close to Putin, praised the military coup led by Traore and called him, “a truly courageous son of the motherland.” After examining these developments, it becomes clear that Burkina Faso under Traore plans to ditch Biden and establish ties with Russia. He will eventually seek the assistance of its mercenary group. However nothing is official yet.

In a pre-emptive response, Biden has decided to exclude Burkina Faso from its trade agreement. Once he realised that his agenda to create instability and terror in the resource rich African country has failed, he severed all relations with it. Otherwise, why would the US, which not very long ago was confident that Burkina Faso would not invite Wagner, remove it from the African Growth and Opportunity Act agreement? This announcement by the US confirms our anticipation.