In an interesting turn of events, the US has deployed its most potent force, the International Monetary Fund to Dominica in order, to triumph the region before China can set its feet in the region 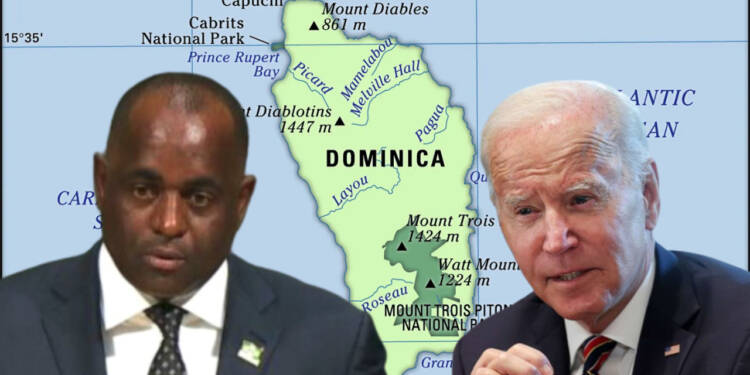 “Deputy Managing Director Bo Li visited Dominica to discuss the existential threat of climate change and its impact on the island, how the IMF can support the country with its Disaster Resilience strategy, and how to mobilize climate financing from various global players,” according to an IMF statement.

The timing of the meeting becomes highly noteworthy. You see, IMF has long championed the interests of its American patrons by advancing policies in developing nations that harmonized with US foreign policy objectives. Thus, it cannot be a random occurrence that the organization’s interest in the Caribbean region has recently rekindled at a time when China is seriously undermining US interests there.

Read More: Caribbean Countries expected billions of dollars for complying with Biden’s green diktats. They got nothing!

The communist nation has been, albeit gradually, turning its fantasies of regional hegemony in the Caribbean into a reality.  China has foreign aid funds worth billions of dollars operating in the area. Through its Belt and Road initiative (BRI), China has indebted a major part of the Caribbean. Make no mistake; the actions are a part of China’s covert but ascertained endeavour in recent years to increase its involvement and authority in the region, thereby conceivably challenging America’s long-standing hegemony in the region.

The US-China geopolitical dispute over Taiwan has also been impacted by the improving diplomatic ties of Caribbean nations with China. You see, the Caribbean Basin is the abode of several nations that recognize Taiwan. However, as China increases its lending and investment in the area, it will have more clout in deciding important matters like Taiwan’s recognition.

To be clear, the United States comprehends the grave repercussions of growing Chinese influence in the Caribbean. Considering that the Caribbean is the southeast maritime approach to the United States, it is strategically important. It serves as a crucial hub and transit location for commercial logistics, serving both the Atlantic side of Central and South America and the eastern coast of the United States. Moreover, a large number of important U.S. ports and military installations are located near or touching the Caribbean, which makes the region even more significant.

Losing influence in the area could therefore be fatal for American national interests. As a result, the US is doing everything possible to prevail in this game of great power politics, and the IMF’s recent involvement in the region should be perceived as an addendum to the US response.

You see, by using the IMF and other international institutions to grant significant loans to developing countries for building projects and increasing oil production, the United States is involved in a contemporary kind of slavery. On the surface, this seems to be benevolent, but the funds are only given to a country if it agrees to use US construction companies, ensuring that a small number of individuals benefit financially. Additionally, the loans are deliberately made too exorbitant for any developing country to repay, and this debt essentially ensures that the country will support American political interests.

As China and US  are fighting like cats and dogs to maintain supremacy in the Caribbean, the countries in the region should tread their foreign policy goals with extreme caution. International organisations like the IMF function as an aristocratic organisation where the rules are written by and for the developed countries of the world. Therefore, the Caribbean nations should regard any actions from these prejudiced organisations with prudence. In the same vein, the Chinese government’s neo-colonial aspirations should be subjected to checks and balances.