In a final blow to the west, South Africa to host Naval exercise with Russia & China

The absence of resounding support from many African states has bewildered the leaders of Western nations. South Africa is leading the charge in this contemporary struggle for self-determination that is being waged by African nations 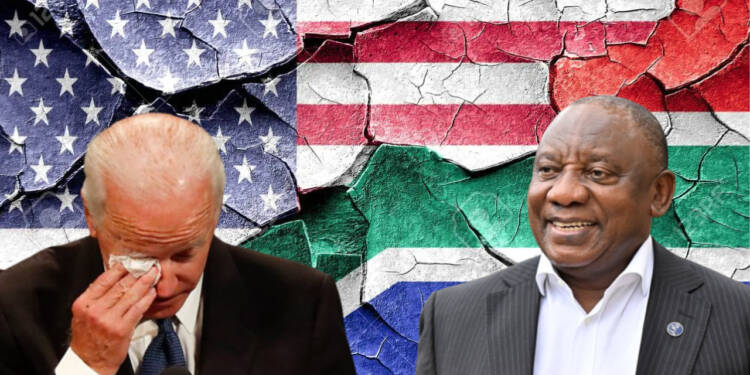 Many commentators frequently characterise the Russo-Ukrainian War as a pivotal moment in international affairs that eviscerated the post-Cold War international order. The conflict is also monumental in the global South, reviving non-alignment and independent foreign policies as geopolitical tensions between the West and Russia escalate.

In addition to demonstrating the precarious state that Europe could be forced into without Russian oil and gas, the war has also revealed the fact that many countries in the global South, particularly Africa, prefer not to support the West despite having capitalist economies and democratic political systems and similar values.

The absence of resounding support from many African states has bewildered the leaders of Western nations. South Africa is leading the charge in this contemporary struggle for self-determination that is being waged by African nations.

Just a few days after the Russo-Ukraine war broke out; South African President Cyril Ramaphosa blamed NATO for the war in Ukraine.

“The war could have been avoided if NATO had heeded the warnings from amongst its own leaders and officials over the years that its eastward expansion would lead to greater, not less, instability in the region,” Ramaphosa said.

Furthermore, much to their chagrin, Ramaphosa outright rejected accepting Western leaders’ decrees in criticising Russia. The South African government even announced that it is permitting a yacht which belonged to a US- sanctioned Russian businessman to dock in the Cape Town harbor.

South Africa has repeatedly criticized the United States for its domineering and paternalistic behaviour toward African countries as well as for attempting to enforce its policy agenda on the world at large.

Without a doubt, this enraged the USA to the point where it has begun to use some of its nefarious tactics. America recently issued a rare terror alert, warning that a terrorist attack might take place in Johannesburg’s upscale Sandton neighbourhood. It did not, however, provide any evidence to support its assertion and did not identify the group, method, or target of the potential attack.

You see, the US has been issuing these attack warnings, which raises questions about the local economies. The American terror alert in this instance may deter investment in South Africa. No entrepreneur would put money into a nation that is experiencing a security crisis. The attempt was therefore obviously made to harm South Africa’s economy because it did not kowtow to American diktats.

The US has also threatened to add South Africa to the Financial Action Task Force’s “grey list” (FATF). But this was not at all taken well by the South Africans. During a press conference, South African President Cyril Ramaphosa criticized the US for issuing such an alert without consulting the government.

He said, “Any form of alert will come from the government of the Republic of South Africa, and it is unfortunate that another government should issue such a threat as to send panic amongst our people”

The final nail in the coffin

And now South Africa has dealt the US such a severe blow that it would spell doom for US aspirations. A tri-nation naval exercise involving China, Russia, and South Africa is expected to take place in February, according to recent reports. This is the second time the three BRICS countries will conduct a joint naval exercise.

The first joint naval exercise between Russia, China, and South Africa, known as Mosi, was held in South African waters in November 2019.

Make no mistake: African countries are no longer easily intimidated by global superpowers. They protest what they view as American egotism and colonialism. The United States must stop assuming that emerging democracies will support them. The era of unipolarity, during which the US could manipulate the foreign policies of other nations, is over. African nations are currently becoming more assertive and confident.  The haughtiness and neocolonial rhetoric of the United States in denouncing the non-alignment of African nations like South Africa would only drive those countries closer to nations like Russia and China.