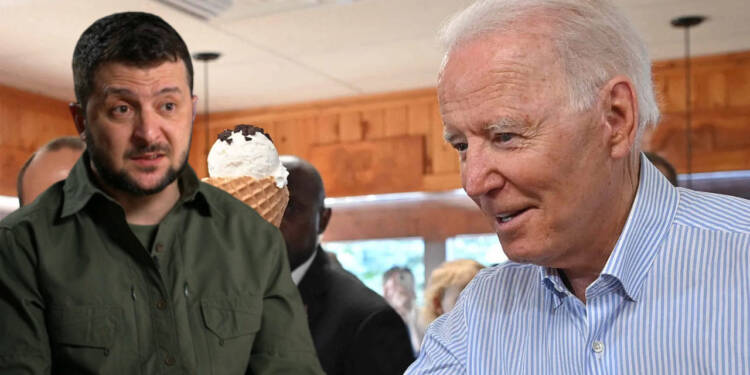 Western media is busy spinning the narrative about how the US is aiding Ukraine in times of crisis. But do you think the US is a Samaritan?

You’ll be shocked when we reveal the substantial profit the US has made from the Russia-Ukraine conflict. The truth is that the US is capitalizing on the dead Ukrainians just to fill its own coffers. In the never-ending lust for wealth, the Biden administration is fuelling the war in Ukraine. Till now, it has earned 200 billion out of Ukraine’s miseries.

A report by Yahoo News on Saturday said that since Russia’s war against Ukraine began in February, EU countries have pledged to spend roughly $230 billion on new armament. Out of which, Germany alone plans to spend $100 billion modernising its military. Given their prominence as suppliers to the European military, US defence companies are certain to secure the majority of such orders. To be more precise, US accounted for 39% of the estimated $210 billion in annual worldwide arms sales from 2017 to 2021.

In many European nations, more than half of recent military spending went to American arms producers; Norway spent 83% of its budget on American imports, while the U.K. spent 77%. According to the Stockholm International Peace Research Institute (SIPRI), from 2017 to 2021, American-made weapons accounted for 95% of the Netherlands’ budget and 72% of the budget of Italy.

The US has long been pressurising European countries to help aid Ukraine. Biden wants to flood Ukraine with weaponry. The conflict has also prompted European countries to ramp up their defences. According to Ian Bond, the director of foreign policy at the Center for European Reform, this is unquestionably the biggest rise in defense spending in Europe since of the Cold War times.

Defense spending in several European nations plummeted with the fall of the Soviet Union in 1991. The recent procurement of weapons shows that the trend is changing. Even if we assume that 40-45% of the orders to be secured by US defence companies, it will be around $100 billion. And this is not it. Biden has been trying to create a Gas empire in Europe.

While Biden persuaded his European counterparts to sanction Russian energy exports, he accelerated LNG exports to the continent himself. Through to June of this year, the US exported about 57 billion cubic meters (bcm) of LNG with 39 bcm, or 68 percent, going to Europe, according to Refinitiv data. That is compared with 34 bcm, or 35 percent, of LNG exports shipped to Europe during 2021 when the US LNG exports totaled around 97 bcm, according to Reuters.

According to energy analyst Laurent Segren, companies fill a big ship with LNG from the US for roughly $60 million and transport it to Europe, where the buying price soared to $275 million. And that means the price has increased by almost five folds.

According to Felix Booth, head of LNG research at Vortexa, companies make more than $150 million on each shipment.

Since 60-70% of the LNG is meant particularly for Europe, that may make around 55 of ships every month. And with 8 months already gone, around 440 shipments were meant for Europe.

And if a company is making $150 million per shipment, it’d be around $66 billion by now. These are just the numbers from LNG exports. When we combine US’ profits from high oil prices, the total amount would go to $200 billion.

Senior officials from the two largest nations in the EU, France and Germany have accused the US of overcharging for liquefied natural gas (LNG), profiting from the energy crisis, and using the conflict in Ukraine to bind Europe to its gas. According to reports, Germany’s economy minister Habeck alleged that LNG exporters, particularly the US, overcharged for gas at a time when Germany’s largest companies are closing manufacturing facilities due to high gas prices. In some situations, even friendly nations charge “astronomical charges,” according to Habeck, who also added that this situation has led to issues that need to be discussed. Who’d tell him that the US is not a friendly nation for them anymore?

Well, the EU, which is already caught in the cobweb of the Ukraine war, is being subjugated to assault after assault by the Biden administration. The war in Ukraine has reshaped the world’s energy markets and the US is the biggest beneficiary of it. Biden’s imperialistic attitude is sickening. Global media will tell you that the US is a “saviour” of Europe. Well, the facts say otherwise. The US is no savior, its only purpose is to annihilate and push Europe to destruction while the US keeps earning in billions.

Why is the West so afraid of Ghana’s Akufo-Addo?