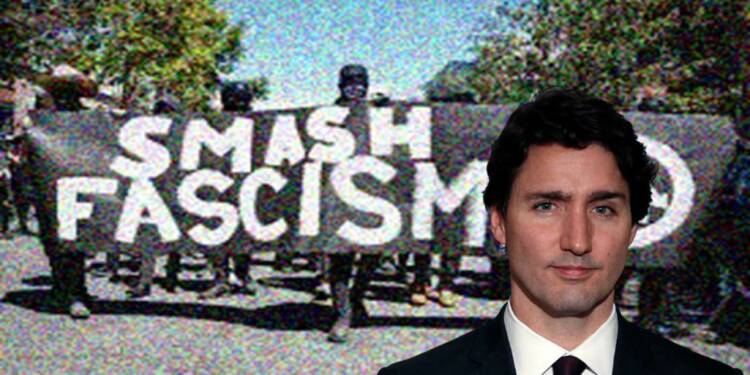 The “pro-Antifa” groups in Canada are doing all in their power to stir more violence and hatred against the whites and spreading woke agenda in the country.

The Canadian Anti-Hate Network, which was founded by Ottawa Authorities, is further evidence that Trudeau fiercely supports these pro-Antifa initiatives. Yes, a Canadian court has publicly admitted that this so-called nonprofit organization that purports to track groups, far-right organizations, and hate crimes in Canada is actually circulating false information and embracing hatred against whites.

Canada’s superior court has acknowledged that Canadian Anti-Hate Network, also known as CAHN has indeed spread crime and misinformation in Canada. Reportedly, the court has ruled that “The evidence disclosed proves that, CAHN did in fact assist Antifa and that the movement has been violent.”

The judge furthermore added, “The Kays submission, which I accept, is that a human rights network like CAHN arguably (except in the most extreme circumstances) should not support a violent movement, and to do so, to most reasonable observers, would not be a “good look”. For the unaware, the CAHN (Canadian Anti-Hate Network) was founded in 2018 by none other than Canadian Prime Minister Justin Trudeau. This organization was founded to identify, track down, and expose hate movements, organizations, and individuals across Canada—particularly on social media.

However, the court has emphasized that CAHN itself is the evil that, it pledges to combat.

The court’s judgment was served on CAHN’s own appeal which was against Journalist Jonathan Kay and Barbara Kay. In 2019, the journalists were sued by the director of CAHN, Bernie Farber. Reportedly, Bernie Farber had claimed that both Jonathan and Barbara Kay had linked CAHN to “violent Antifa,” which is a ‘Libel’.

But, the court served CAHN a very unpleasant verdict citing that CAHN’s own hands are dirty.

In 2019 I was sued for libel by a director of @antihateca. He claimed @BarbaraRKay & I linked CAHN to "violent antifa.” Judgment released today: Claim dismissed. Judge: (1) CAHN *does* assist antifa; (2) CAHN director has used courts to stifle detractors (tho failed in this case) pic.twitter.com/2mVpwG6k6w

Well, Jonathan Kay had been in the crosshairs of CAHN for a long time because the journalist was consistently bashing the so-called ‘Anti-hate’ network. In a Quillette article, of which Jonathan was editor reports about Antifa as violent and advocating violence to effect change were reported. Jonathan once claimed that the CEO of CAHN wrote in defence of Antifa, a group that advocates “physical disruption” to spread its message.

Jonathan has described numerous instances where Antifa used intimidation, violence and generally mimicked fascist group activities in Portland, Oregon, and Hamilton Ontario, An example of their acts include, screaming at an elderly woman at a town hall event in October 2019, where they tried to stop a speaker, Maxime Bernier, and called her a “Nazi scum”. As a result, the CAHN sued Jonathan to prevent him from reporting againt the Antifa organizations.

Even after the judgment, the CAHN on its social media is claiming that The Canadian Anti-Hate Network is proudly anti-fascist. However, one should ask why such stupidity and hatred by Antifa is still running on the streets. The answer is pretty obvious, Justin Trudeau and his liberal government have provided $268,400 through the Anti-Racism Action Program to support the Canadian Anti-Hate Network’s project, for containing and countering Canadian hate groups.

Sadly, same organizations are promoting a hateful agenda against white people and woke agenda even more. Trudeau has committed more than $35 million to 175 anti-racism initiatives since October 2020 in an effort to eliminate hate crimes against ‘Indigenous and racialized communities,’

Hatred in any form is unacceptable and has no place in Canada. However, if Trudeau displays some courage and decides to act, the wokes, which are sadly the voters of his own country may rise up in arms against him.

Ottawa has a duty to address the distressing reality of the rise of hate-motivated organizations and ideology in the nation. This country’s stability is hanging by a thread.

Why Antigua’s leader is wrong in blaming India for global climate change?