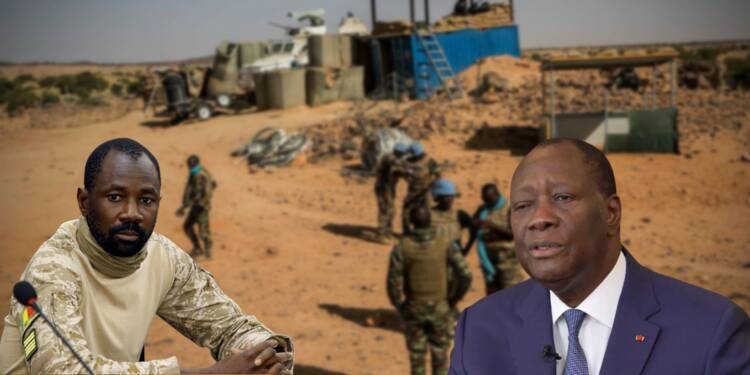 Ivory Coast to withdraw from UN peacekeeping force in Mali: Mali, a landlocked country in West Africa, previously acted as a Western enclave to support Western countries in keeping their influence in the Sahel. But things recently took a turn for the worst for the West when France announced that its military involvement in Mali was coming to an end. The US- controlled Ivory Coast’s forces’ withdrawal from Mali is the latest fatality in the endless series of Western follies in the Sahel.

According to recent reports, Ivory Coast will be gradually withdrawing its military contingent from the United Nations peacekeeping mission in Mali (MINUSMA) after the continued detention of 46 Ivorian soldiers who have been accused of being mercenaries.

Tensions between Ivory Coast and Mali:

Moreover, a few months ago, the Malian authorities arrested nearly 50 soldiers from Ivory Coast who came to Mali to work for a contracting company of the United Nations mission in Mali. This move also raised tensions between the two West African countries as the Mali government accused the Ivory soldiers of being “mercenaries”.

Read More: Mali’s military government has a huge bargaining chip to get the dissidents residing in Ivory Coast back

Make no mistake, the West has been puppeteering the Ivory Coast government in order to maintain Western nations’ steadily decreasing clout in the Sahel region.

You see, the attitude towards Western nations in Mali and the Sahel changed dramatically between 2013 and 2021. The West, which was at first lauded as a savior, is now accused of failing to control the security situation and even encouraging neo-colonial dependency patterns.

A few months ago, France announced the termination of its military involvement in Mali. While the French President Emmanuel Macron refused to admit failure, the Malian government and citizenry believe otherwise.

Western countries also lost the Malian public’s confidence owing to a lack of accountability over civilian losses during military operations. Furthermore, the Malian government and people have constantly complained about Western affiliation with “terrorists”.

It was against this backdrop that the Western countries came out in full support of the Ivory Coast due to the nation’s proximity to Mali and potential role in assisting Western countries in containing Mali and achieving their hegemonic objectives in the Sahel region.

Read More: Al-Qaeda’s Mali arm is terrified as Wagner group looks all set to eradicate it

The rise of Moscow:

However, the recent withdrawal of Ivory Coast military is likely the death knell for the West in the Sahel region and will only enable Russia consolidate its presence there.  You see, when the French withdrew their troops from Mali, Russia was already in the country and it successfully filled the void created by the European country’s withdrawal. With little time to spare, the Wagner group entered the scene and pledged to assist Mali in its fight against Islamic terrorism, a persistent problem for the nation. Additionally, the Wagner Group has already been closely collaborating with the Central African Republic (CAR), another former French colony.

These success tales would irrefutably increase support for Russia among the Sahel countries. Russia is regarded by several nations in the Sahel as a trustworthy partner in the fight against Islamism. This, combined with the West’s neocolonial discourse and duplicity regarding multilateralism, the use of force, and democracy, would entice many countries to accept Russia as a dependable strategic ally.

Bill C26: Trudeau’s tool to hack into your life, work and mind