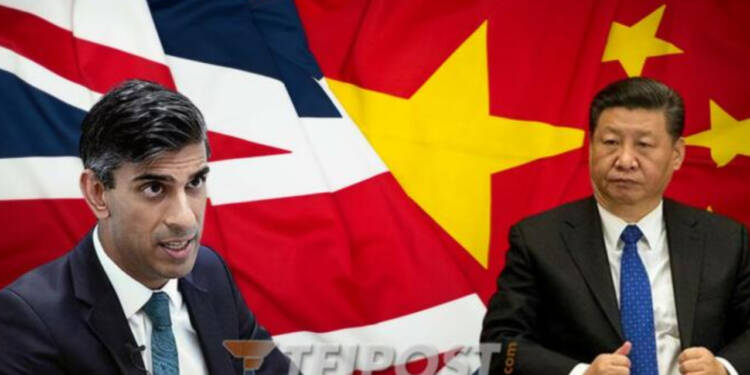 Unlike all the other politicians who commit fake promises while running in the elections, the newly sworn-in UK Prime Minister seems to deliver on his words. Rishi Sunak vowed to decouple with China and campaigned on an anti-China manifesto which was viewed as a vote-bank manoeuvre but the politician has now come up with a validation on the same issue.

The country that eyes the dream of becoming a global economic power and was an important trading partner of the UK is now having nightmares. Ever since Rishi Sunak took up the baton, his tough stance against China has been raising tensions between the two countries. Among the many vows he made in his campaign, Sunak is all set to strike a blow to China’s presence in the UK by overturning a chip factory deal.

The newly sworn-in PM of the UK considers China and the CCP as the largest threat to Britain. He also thinks that China is the biggest threat to the world’s security and prosperity. A bold leader in Rishi Sunak has the audacity to not toe-the-line of China and declare it as the UK’s number one threat. In a bid to weaken the stronghold of China in the UK, the country overturned a chip factory deal.

The UK ordered Wingtech to sell the chip facility it acquired last year.  According to a person acquainted with the situation at the time, Wingtech’s Dutch company will be obliged to sell the 86% of Newport Wafer Fab it acquired in July 2021 for roughly £63 million ($75 million).

Read More: These nations once viewed China as their best friend. The Ukraine war has changed the equation

After a thorough investigation, British officials came to the conclusion that the site’s potential to produce compound semiconductors, which could be used for facial recognition, 5G, and electric vehicles, posed a risk to national security “and the potential for those activities to undermine UK capabilities,”.

The overturning of the deal has irked the nerves of China and the country can’t help but shit bricks. When the UK government decided to revoke Nexperia Holding BV’s acquisition of a Welsh semiconductor factory, China claimed that the UK had exceeded its power and infringed the company’s rights.

“The UK has overstretched the concept of national security and abused state power to directly interfere in a Chinese company’s normal investment cooperation in Britain,” Chinese Foreign Ministry spokeswoman Mao Ning told reporters at a regular press briefing on Friday. “This violates the lawful rights and interests of the company concerned and the market economy principles and international trade rules which has long claimed itself to be a champion of.”

Now, for a country like China which eyes a dream of becoming a global economic power, UK’s actions will serve as a major setback. Sunak will soon alter the dynamics and it is going to cost China its status as a rising megastate. China’s ambition to be the driver of unipolar world order will come to a dead end and the UK has already entered the game of quashing those hopes of China.

Read More: Rishi Sunak is no Boris Johnson and Russia is not untouchable anymore

Rishi Sunak had long back declared how he will face down China in his ‘Ready for Rishi’ campaign. Sunak vowed he would close all 30 of China’s Confucius Institutes in the UK which ranks the highest number in the world. He said, “I will build a new international alliance of free nations to tackle Chinese cyber-threats and share best practices in technology security”. Moreover, to counter Chinese industrial espionage, he has promised to expand MI5’s reach to provide greater support to British businesses and universities.

All in all the new prime minister wants to protect key British assets and free Britain from China’s clutches. Throwing semiconductor units out of the UK is just one of the shocks the leader is all set to give China. He is in a bid to create a diverse and robust economy that isn’t reliant on a communist dictator. Sunak has delivered on his promises of making the Britishers finally realize the dream of decoupling with a dictatorial nation like China.