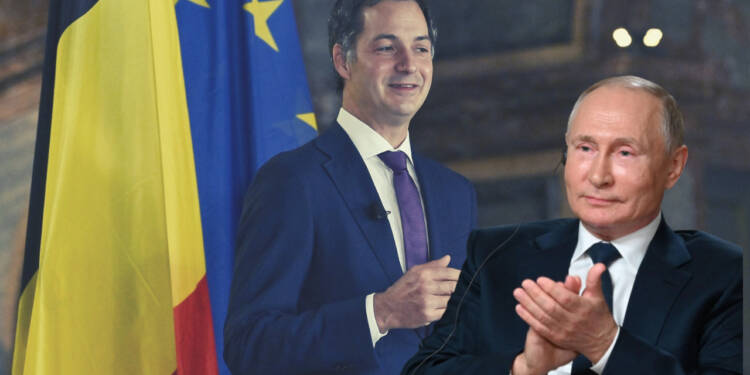 Brussels might be tough on Russia when it comes to sanctions, but, with Belgium, that’s definitely not the case. Almost a month ago, Transparency International, which allegedly vows to end corruption all across the globe had advised the EU to sanction Russian diamonds. However, the EU swiftly denied it. Instead, the EU targeted imports of Russian steel, wood pulp, and paper among other things in its most recent sanctions, but diamonds were left untouched.

In order to maintain moral pressure, the EU urged its members to impose sanctions on Russian diamonds. However, Belgium, whose economy clearly depends on these diamonds has made it clear that it will never allow these sanctions to take shape.

According to a media report by the Guardian, Belgium’s trade in Russian diamonds has continued despite moral pressure from other member states. Reportedly, Belgium is still trading diamonds with Russia. Russia’s renowned diamond mining Russian state-controlled firm Alrosa is actively engaging with Belgium to provide diamonds.

Nations like Poland and the Baltic states are pressing for diamonds to be included in the EU’s next round of sanctions, which senior officials have promised would come before the end of the year. But, Belgium is not interested in such efforts. Belgium has publicly pledged not to block diamonds. It has also expressed concerns that such a move may harm EU economies more than Russia’s purse.

The traders of Antwerp World Diamond Centre have warned that if the EU imposes sanctions on Russian diamonds, this would mean a death knell for Belgium’s economy. Reportedly, AWDC has claimed that 10,000 jobs are at risk from stopping imports of Russian diamonds: 4,000 direct and 6,000 indirect. In addition, Belgian officials have also warned the EU about the related potential job losses.

This might be the reason why, despite the government’s claim that it has never attempted to thwart sanctions, Belgium abstained from discussions over sanctioning Alrosa with the EU. Big companies have alternatives to Russian diamonds. But for small traders, it is extremely difficult to look for alternatives. Now one may ask, are Russian diamonds so important for Belgium traders?

The answer is an absolute yes.

Read More: UK is doomed, and Belgium is making fortunes out of it

25% of the raw diamonds passing through Antwerp before the invasion of Ukraine were from Russia. According to data from Belgium’s national bank, Russian diamond imports exceeded €1.8 billion (£1.6 billion) in 2021 and €1.2 billion in the first eight months of 2022. After the Ukraine war, as the traders from India and the middle east grabbed all existing supplies, the supply chains have become extremely tangled, making imports from regions like Africa extremely difficult.

Yet, despite the difficulties, Antwerp was successful in purchasing Russian diamonds from the market.

In June 2022, the trade increased significantly to €393.8m before rapidly declining. Russian diamond imports into Belgium were €35.9 million in August 2022 compared to €215.4 million in the same month in 2021, thereby meaning a decline of 83% year over year. The trade is now in freefall and this is a major reason why Belgium is looking to restart the trade.

Western leaders are deluded that these diamonds are funding Russia’s war machine. This is why Belgium has roared back at Brussels’ attempts and stressed that sanctioning would be an attempt to suffocate Belgium’s economy.

The AWDC publicly calls for Russia with open arms and opposes an EU embargo. Even the government is stressing that it wants to “protect” people’s jobs in Antwerp and in poor Russian regions. The cracks within the EU are again wide open.