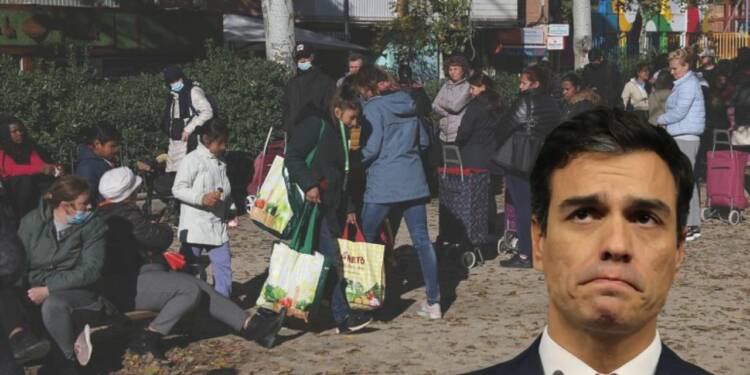 Spain bankruptcy: What are the signs of a crisis-ridden economy? One might respond, “a high rate of inflation,” “people on the streets,” and “a massive upheaval in order to address hunger needs.” What if we told you that all these are taking place in Spain, a personal favorite of liberals?

Yes, it’s true. The economic crisis in Madrid is comparable to the one from 2008 to 2014. However, the only distinction this time is that the liberals in charge of Madrid at the moment are even more incompetent than their predecessors. Spain is clearly on the cusp of bankruptcy.

According to a media report by Euronews, the economic crisis in Spain, which normally goes unnoticed by the European media is now getting more intense than ever. Reportedly, record inflation has pushed Spanish citizens to ask for humanitarian aid.

Hugo Ramirez, a construction worker in Spain has stressed,  “We see prices going up every week, even on basic products… We can’t manage it anymore,” Every Saturday, Spanish people come to collect food from an association created during the pandemic in the working-class neighborhood of Aluche to help residents in difficulty.

Spain bankruptcy: The crisis is worsening

Hugo Ramirez’s example is just the tip of the iceberg. Thousands of people wait in line for food every weekend in the Spanish capital, including people like Hugo Ramirez. “Hunger queues” had started to appear all over Madrid at the beginning of the pandemic, but the recent months of skyrocketing inflation have made the phenomenon even worst. Raul Calzado, a volunteer with the Mutual Aid Network of Aluche (Rama) which facilitates hunger queues stressed, “Every week we see new families in need, especially since the war in Ukraine,”

Pasta, canned goods, and diapers are taken up by the Spanish population from these camps. So, it is undoubtedly easy to speculate how precisely the Spanish economy is doing. These hunger lines were initially established to aid only poorer families who were in desperate need of assistance during the pandemic’s lockdown period, but as a result of the inflation, which is making Spanish people’s lives more miserable than ever, an increasing number of Spanish families have begun to take this aid.

Read More: A frustrated Spain asks NATO to spare Russia and instead focus on Africa

Make no mistake, the economic data from Spain is also indicating that a gruesome crisis is knocking on the doors of Spain. Spanish Economy Minister Nadia Calvino has announced that she expects the 12-month inflation rate to remain at around 7% until the end of this year and will likely start falling only from 2023.

But in 2023, it is anticipated that Spain will enter into a recession. Furthermore, after the Ukraine war, Spain’s unemployment rate edged up to 12.48 percent in October, thereby pushing millions into unemployment. According to provisional data from the National Statistics Institute (INE), the country’s growth is sharply down to 1.5 percent in Q3 2022.

The slowing growth in Spain is largely due to its poor performance in the real estate sector, where activity contracted by 2.5 percent, and a drop in exports and business investment.

Read More: Spain’s right was snoozing since ages. But it has finally woken up and looks really strong

It’s not like PM Pedro Sanchez and his ministers did nothing to stop the rising crisis. But, welfare groups have always castigated the measures stressing that they’re not enough. Spanish people hope things will get better, but facts say otherwise. The situation has been deplored to the extent that one could compare Madrid with their native Venezuela, which has been plagued by unbridled inflation for the past ten years. Bankruptcy is indeed nearing in Spain and only some robust economic policies can help it rebound.