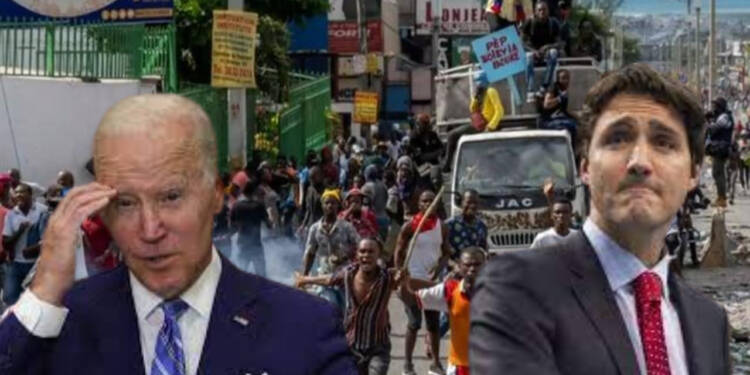 Haiti Crisis: Haiti’s situation is going from bad to worse with each passing day. The severe unrest in Haiti has resulted in many Haitians fleeing the nation and migrating to other neighbouring countries in the region. On top of it, the Cholera outbreak has further added to the miseries of the Haitians.

We’ve mentioned before how the US & Canada through its “Core group” have only made the situation in Haiti even worse. The US’s approach to Haiti so far has been disastrous. However, the end of the US and Canada’s Haiti Crisis is nowhere in sight.

The ongoing crisis in Haiti is also the result of foreign powers like the US and Canada in its internal affairs.  These nations are a part of a secretive colonial and imperial alliance in Haiti known as the “Core Group” which has deepened the country’s crisis. They run the political system of Haiti under the guise of “protecting its democracy.”

After the assassination of President Jovenel Moise, the United States and other purported “friends” of Haiti aided Ariel Henry in maintaining his position of authority.

US and Canada passing the buck to each other

As the humanitarian crisis in Haiti intensified, the West-backed government in Haiti led by Ariel Henry has asked for an international military intervention to combat gangs who have strangled access to fuel and critical supplies in the middle of the outbreak.

However, the US is not ready to lead such a military mission. Instead, the United States wants Canada to lead any military intervention. President Joe Biden’s administration has made clear it has no desire to send US troops in harm’s way. After major foreign policy setbacks like a botched withdrawal from Afghanistan, the US right now cannot afford another failed military endeavour. However, Haiti is too important for American interests to be left alone. Haiti possesses some of the greatest oil reserves in the world. It is predicted that its untapped reserves could include up to 941 million barrels of crude oil and 1.2 trillion cubic feet of natural gas. Furthermore, the nation is thought to have gold deposits worth about $20 billion.

Read More: Trudeau’s Haitian adventure is a lesson in incompetence

Therefore, now instead of sending its own troops, Washington is asking Ottawa to lead a military mission to Haiti. However, it seems even Canada is not willing to lead the military mission in Haiti.

The Canadian government has stated that Canadian military intervention in Haiti can’t happen unless all political parties in the troubled nation agree to it. Perhaps the government is being cautious and realizing the implications of the intervention.

Trudeau has said that Canada is working with CARICOM, the organization of Caribbean governments, along with “various actors in Haiti from all different political parties” to get a consensus on how the international community can help.

He further said, “It is not enough for Haiti’s government to ask for it,”. “There needs to be a consensus across political parties in Haiti before we can move forward on more significant steps.”

Perhaps, the Canadian administration has learnt from recent US military misadventures and realized the implications of the intervention. Further, Canada’s own military is facing a crisis which may not be capable enough to lead any such foreign military interventions. If the Canadian government takes this causeless action as the US has suggested, it is bound to fall flat and destroy its remaining military resources.

Thus, both Canada’s and US’s approach to the Haiti crisis has been unbelievably terrible so far. Unfortunately, It’s the Haitians who have to bear the brunt of the mess.