Jimmy Cherizier said, “If Ariel Henry resigns at 8:00, then at 8:05, we remove all the barricades, so the trucks can come to the fuel depot and fill up, and then the crisis will stop." 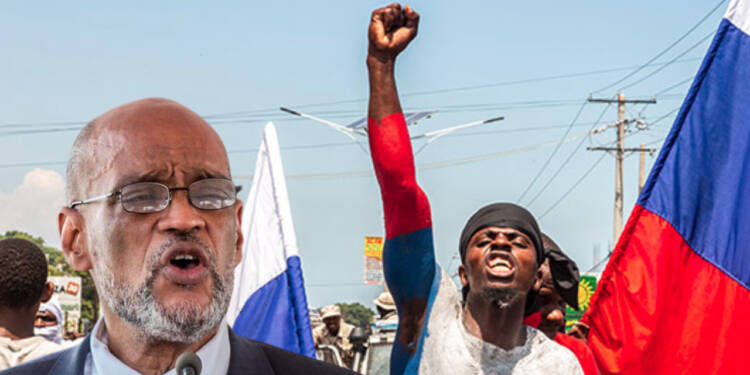 G9 is a powerful gang federation in Haiti led by a sanctioned gang leader Jimmy Cherizier. Currently, the G9 gang alliance has become an eyesore for Rights groups and the UN, which have accused the gang of deadly attacks on civilians.

The gang violence in Haiti has only gotten worse. Schools are shut down, food and water access have been lost and the UN estimates that over 5 million Haitians are facing food insecurity. The increase in violence and cholera outbreak has left Haitians at the mercy of armed gangs.

However, is it only the G9 gang and alliance that is responsible for the deteriorating humanitarian crisis or there’s someone behind the doors?

Haiti’s gang leader Cherizier, also known as “Barbecue”, is the leader of G9 (a federation of over a dozen Haitian gangs) and has been linked to various human rights violations and fatal attacks against civilians, according to multiple reports by media outlets and rights groups.

The United Nations also has blamed the gang for the severe fuel shortages over the last months. The gang alliance blocked a major fuel terminal in the capital, Varreux terminal, in Port-au-Prince which forced hospitals to cut back on services and aggravated the crisis in Haiti.

Cherizier said the tactic of blocking fuel terminals was aimed to force the “unelected” prime minister of Haiti, Ariel Henry, to resign from office.

While talking to Al Jazeera in an interview, Cherizier said, “If Ariel Henry resigns at 8:00, then at 8:05, we remove all the barricades, so the trucks can come to the fuel depot and fill up, and then the crisis will stop.”

Read More: Trinidad and Tobago showed the Caribbean Countries how to deal with Chinese Debt trappers

After the assassination of President Jovenel Moise, the United States and other purported “friends” of Haiti aided Ariel Henry in maintaining his position of authority. So actually the United States and its allies like Canada, France, and officials from the UN—are in ‘real charge’ in Haiti. The U.S. has in fact continued to support Henry’s government despite claims that its members engaged in corruption and economic incompetence, as well as Henry’s involvement in Mose’s assassination.

There is a secretive colonial and imperial alliance in Haiti known as the “Core Group”. The “Core Group” is made up of ambassadors from Germany, Brazil, Canada, Spain, the United States, France, and the European Union—which has deepened the country’s political crisis.

Keeping all this in mind it would not be wrong to say that foreign powers or groups are also meddling in Haitian internal affairs which are contributing to the deteriorating Haitian crisis and weakening democracy.

So though G9 has many atrocities in its bag to get bashed for, the West’s over-indulgence in Haiti for decades is also to be blamed for the situation it is in right now! The US and its allies obsession with controlling an under-developing nation in order to get a hold of its raw resources have destroyed many countries. Recently, huge protests erupted in Haiti against the UN, US and Canada’s plan of military intervention in the nation.

Read More: An anti-West revolution has started in Haiti as people rise in arms against “foreign invaders”

Well, these interferences have led to instability in the nation. Consequently, the nationwide protests in Haiti have paralysed the country and protestors have called for the resignation of their West-backed leader. In all this, it is the civilians in Haiti who have to face this catastrophic crisis. Haitians have been demonstrating against chronic gang violence, poverty, food insecurity, inflation, and fuel shortages.​

For the West, Africa does not deserve the right to live a healthy and dignified life