During the nationwide protests that erupted recently, the Henry government's request for international intervention was roundly condemned, and protestors once again called for the resignation of their fictitious leader 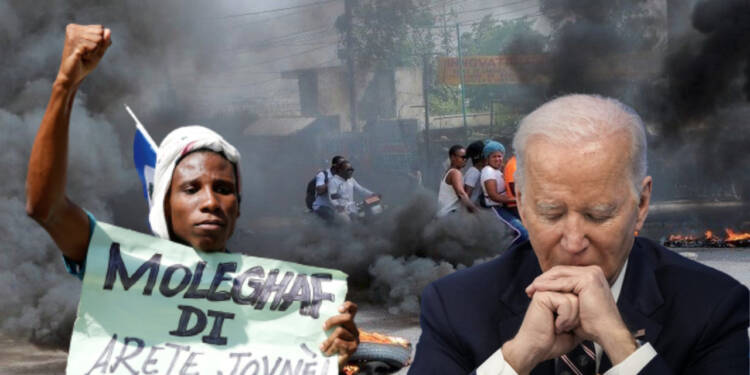 The gang violence that has pervaded Haiti in recent days has only gotten worse. People are unable to leave their homes because gangs are in charge of the streets. Schools are shut down, food and water access have been lost, and the UN estimates that over 5 million Haitians are facing food insecurity.

Recent reports state that the U.N. Security Council is making decisions about sending “a specialised armed force” to Haiti to bring about peace. More than seven weeks have passed since the most recent statewide anti-government demonstrations began, and gang violence has paralysed Port-au-Prince and the surrounding areas.

Don’t be deceived; the United States is actively involved behind the scenes.

Haiti is currently in a situation that could be described as a civil war between civil society and the elites in charge of the government. These elites are nothing but primarily moochers thriving on the despair of common people and are supported by the U.S. and other powerful nations like France and Canada. Both Haitian elites and foreigners act as the puppet masters behind the curtains and arm the gangs.

Multiple foreign interventions have spiraled the country into a web of poverty and rampant violence. The debt that France had Haiti pay after it won independence in 1804 and ended slavery devastated the country.

In addition, under the guise of promoting stability, the U.S. occupation of Haiti in 1915 imposed forced labour, increased bloodshed, and further destabilised the nation. This was a pivotal moment that would shape subsequent state structures and patterns of American dominance in Haiti for the remainder of the 20th and 21st centuries, leading to prolonged colonization.

Following the murder of Jovenel Mose, the United States and other purported “friends” of Haiti have aided Ariel Henry in maintaining his position of authority. Because the United States and its allies—countries like Canada, France, and officials from the UN—are in ‘real charge’ in Haiti, this backing for his government is sufficient to keep him in office.

Henry’s dishonest, unlawful, and immoral government has now requested assistance from the exact colonial masters who conquered Haiti because he is both incapable and unwilling to listen to the people who desire true democracy.

For Haitians, however, this is not promising. There has been opposition to the plan to send an international military force to Haiti.

During the nationwide protests that erupted recently, the Henry government’s request for international intervention was roundly condemned, and protestors once again called for the resignation of their fictitious leader. You see, the coalition of civil organizations and political forces in the country doesn’t want foreign soldiers to come.

Daniel Foote, a veteran American diplomat who carefully monitors Haiti, claims that the population is more incensed than he has ever seen it. It is at this point that any foreign action will be met with a violent backlash, particularly if it results in Henry keeping control of his tyrannical regime. “More than just street protests might be used to counter foreign forces perceived as an invading army, supporting a dictator,” he warned.

International interventions in Haiti have never been advantageous to the people of Haiti. So-called “humanitarian operations” have actually robbed the people of all humanity. It started with the 1915 invasion and occupation that established a terrible precedent of military disasters, continuing with the United Nations mission that introduced cholera to the nation.

Foreign intervention is risky since it is frequently unilateral. Haiti and Haitians become invisible in the eyes of the international community when the U.S. and its proxies back the power of an illegitimate regime. Haiti will see any change only when it is allowed to make its own decisions. This future vision must originate with the Haitian people; it cannot be imposed by foreigners who are ignorant of Haiti’s culture, language, or history.