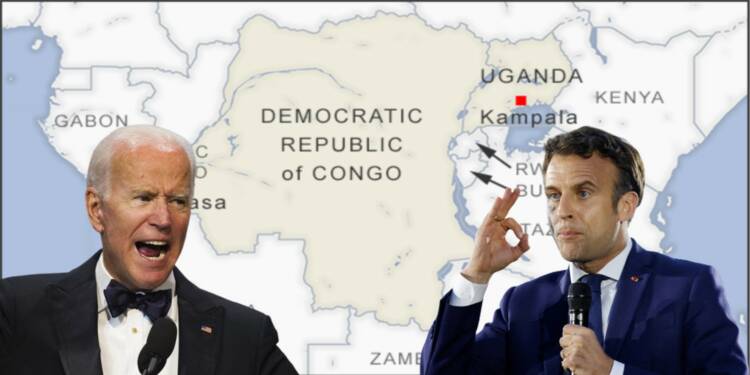 Biden and Macron conspired against Putin after their lackey Zelensky’s aggressions were met with resistance from Russia. However, today their actions have resulted in both of them conspiring against one another to save their countries from disasters. The victor in this tug of war is the East African Community which is profiting from the fight between US and EU.

The eastern region of Democratic Republic of the Congo (DRC) is troubled by M23 which is infamous for its outrageous actions which include countless slayings, rapes, abductions among others.

M23 is financed and backed by Rwanda which in turn is a puppet of the US. Rwanda’s President Paul Kagame is trying to make sure that the ulterior motive of Washington, which is to capture the resources of DRC such as gold, cobalt and copper, is accomplished.

In some areas of DRC, Kagame has also managed to establish control. In fact, the M23 has created a smuggling nexus with local gangs in DRC and are on a spree of theft of DRC’s minerals. It is transporting gold and cobalt out of the nation and purchasing arms from the funds generated.

Rwanda acting like a good ally, voted in favor of Ukraine at the UN due to which the West has never imposed sanctions on it despite massive evidence available regarding Rwanda backing M23 insurgents.

In response to the massive violence perpetrated by the terror group which resulted in mass displacement and loss of lives, Kenya’s president William Ruto decided to assist its ally DRC. He announced that Kenya would deploy the Kenyan Defense Forces (KDF) in the eastern region of DRC. Till now two contingents of KDF and atleast 1000 Ugandan troops have arrived in the Democratic Republic of Congo to eradicate the insurgents from the region.

Ruto said that the establishment of peace in DRC means peace in Kenya. Emphasizing on the fact that DRC is a significant economic partner of Kenya, he stated that the presence of terrorists in the neighbouring regions will also impact the Kenyan citizens.

This development is shocking because Macron is an ally of the US, which has created all the problems in the eastern DRC. Washington finances M23 through Rwanda and instructs it to capture the mineral resources of DRC. But, why is France calling on the European Union to support the East African regional force?

The answer lies in the Russo-Ukraine conflict. In the backdrop of the Russia-Ukraine crisis, the US and Europe, imposed sanctions on Moscow in the hope that they will destroy the economy of Moscow. Biden, Scholz and Ursula barred Russian banks from the international market, seized the property of its businessmen, banned its athletes, froze the overseas assets of its oligarchs hoping that these measures will deter Russia.

However, instead of destroying Russia, the measures backfired, resulting in a massive inflation and recession in the US and Europe. Now, their leaders are struggling to save their sinking economies and approaching African countries for oil, gas and other resources and one of those countries is DRC.

Now, France realizes that M23 only follows the instructions of Biden. It too wants to gain an entry in the central African region to make up for the loss it suffered in the Sahel region. But how is it going to do that? By calling on the European Union to finance the East African Regional Force (EARF), Macron is trying to establish its presence in the region by exploiting the DRC’s conflict.

Like the US, the EU is also trying to take advantage of the unstable situation of DRC and further its interests. But if this happens, then there will be a confrontation between Brussels and Washington in DRC, as both will fight to gain control, which will further escalate the already tense situation. The African nations now know the reason behind the proxy conflicts of the West in the continent and they will not allow the West to further exploit the continent.