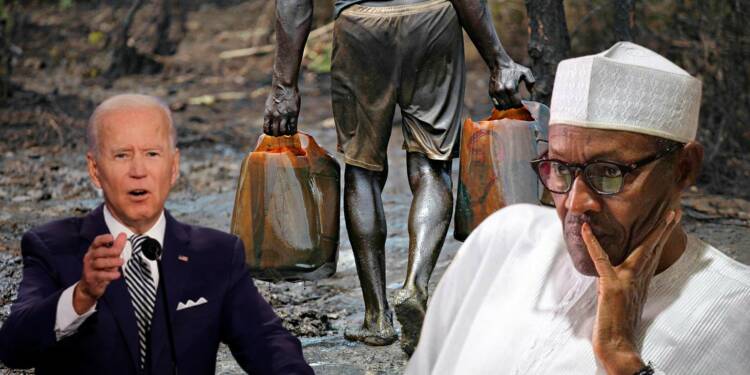 The Russo-Ukraine war has skyrocketed the importance of the resource-rich continent of Africa. Gasping for oil and energy supplies, the Western nations have started a neo-scramble for Africa. But every attempt they have made to win over the African countries has failed miserably. So, they began robbing resources from Africa. However, African countries like Nigeria have made it clear that they will no longer allow the West to stymie their prosperity.

In the wake of global protectionism brought on by the COVID-19 epidemic, Africa has begun to comprehend the significance of self-sufficiency. African countries have made it crystal clear that they will not allow Western countries to continue plundering them. This has prompted energy-starved greedy Western countries to plunder African oil.

According to recent figures, Nigeria is the world capital of oil theft, with at least 400,000 barrels lost every day. The larceny is wreaking havoc on Nigeria’s economy. The Nigerian naira has recently dropped to historic lows against the US dollar, and the government is straining to satisfy its foreign exchange obligations.

Nigeria, one of the major oil producing nations, is reported to have lost 141 million barrels of crude oil, an equivalent of $1bn worth of revenue in the first quarter of 2022. This ballooned to about $10.246bn by July.

Make no mistake, the Western authorities have given their blessing to this entire illegitimate affair in order to assist an otherwise docile Europe desperate for oil. Stolen oil form Nigeria worth billions of dollars is sold every year on international markets and much of the proceeds are laundered in world financial centers like Britain and the United States.

The Nigerian government is doing all possible to put a stop to these malicious operations on its soil.

Nigeria just started drilling for oil and gas in the northeast, a first for the African oil powerhouse, whose production is dropping after decades of exploitation of significant deposits in the south.

Nigerian National Petroleum Company Limited made the discovery of the Kolmani field, which is situated in the states of Gombe and Bauchi and has estimated reserves of over 1 billion barrels of crude oil. In addition to drilling, the project, according to the presidential announcement, “aims to open an oil refinery, a gas processing unit, a power plant, and a fertiliser factory.”

Without a doubt, the recent oil field discovery will result in a significant rise in Nigeria oil supplies, allowing the African country to fatten its coffers, especially against the backdrop of rising oil prices attributed to the Russo-Ukraine war. Additionally, now that supplies are pouring, it makes perfect sense that the majority of businesses would choose to purchase oil from the Nigerian government legally rather than take the chance of being involved in unethical trading.

Also Read: Nigeria snatches 4 oil sites from a Chinese company and kicks it out

Moreover, a pipeline surveillance contract worth N4 billion was awarded to a former warlord, Government Ekpemupolo, to enlist the support of host communities to protect the pipelines.

The Nigerian Navy also made a score last month when it seized a supertanker with three million barrels of crude oil off the coast of Equatorial Guinea.

These recent steps would undoubtedly develop trust and public confidence among Nigerians as they witness their government take action against the fraudulent Western authorities. Earlier, it was customary to see how susceptible most African regimes were to Western influence. But recent examples of countries like Nigeria regulating nefarious practices by Western nations on their territories would not only forbid the enslavement of Africans by these firms but would also play a significant role in safeguarding the national interests of African states.