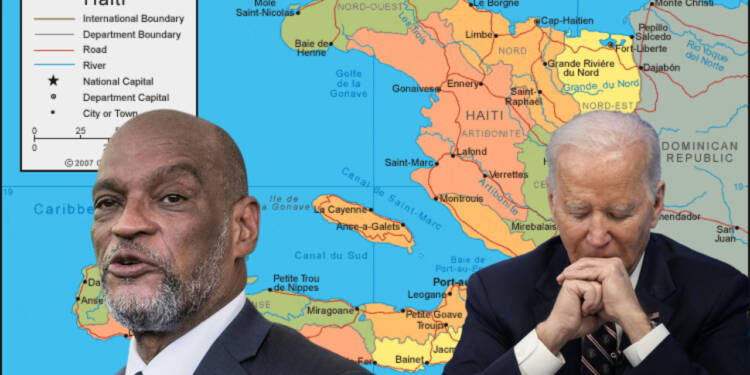 The US has always maintained a dominant presence in the political situation of Haiti, in fact in 1915, the US Marines invaded the nation, established and confiscated all the gold from its banks and transferred it to their National City Bank of New York. Unfortunately, the US government even rewrote the constitution of Haiti which legitimised the buying of its land by foreign investors.

The colonial rule of the US received tremendous resentment from the masses, which prompted the US government to murder Charlemagne Pearlte, who was a leader of the nationalist movement of the country and parade his dead body to spread terror.

After the end of its occupation, the US started its neo-colonial agenda in Haiti by rigging elections and installing its puppets as the leader of the country. It supported the authoritarian regime of the Duvalier Dynasty which saw severe political and social turmoil with suppression of dissent, suspension of elections and abandonment of democratic institutions. In exchange for crushing public discontent, the Duvalier regime gave Washington access to Haiti’s resources and wealth.

After the demise of Duvalier’s reign of terror in 1986, the new president Jean-Bertrand Aristide’s government was overthrown in a coup organised by the CIA, which ensured that his supporters are massacred, and once again a US puppet was installed as the leader.

Whenever a leader who refuses to accept the dominance of the West comes to power in Haiti, he is either assassinated or toppled by the US. As Aristide returned to power in 2000 and began implementing social programs, the CIA once again orchestrated a coup against his government. This time the US abducted him from his house and deployed its troops in the country which remains to this day under the garb of humanitarian assistance.

The involvement of Western players has obstructed economic progress in Haiti which is dependent on the UN for financial support. In the last few years, natural calamities, political crises, administration’s mismanagement and declining of its currency, gourde, have hindered development.

Similarly, the former president of Jovenel Moise’s assassination, though not committed by the US as there is no evidence, remains a mystery. He was murdered by a group of mercenaries from Colombia, dozens were apprehended in his slaying. However, the police noted that they were ex-military men who worked for security firms and provided their services to various countries. There were reports which claimed that Biden may have had a hand in his assassination although nothing is official.

Currently, the current leader of Haiti, Ariel Henry, is a puppet of the US and its allies. The West has urged on his behalf the people of Haiti, who are facing poverty, unemployment, crime, food insecurity and problems due to the recent earthquake, to support Henry. The US is again trying to interfere in the internal affairs of Haiti by making sure that Henry, who will satiate its needs, remains in power.

Henry, who is witnessing his nation plunging into a deep civilian crisis marked by popular discontent, then sought the assistance of the US to suppress demonstrations and prevent violent crime stemming from recession. However, the US doesn’t want to send its forces as the failure of Iraq and Afghanistan can be repeated in Haiti. Therefore it is calling on Canada to help Haiti’s prime minister but Canada too doesn’t want to get involved here.

The current regime has realised that relying on the false promises of the US will only escalate misery and problems for Haiti, therefore it is looking to other nations for support.

Read more: US and Canada’s Haiti debacle is far from over

In such a situation, the deputy foreign minister Azad Belfort visited Vietnam on Thursday and emphasised cooperation between two nations in security, agriculture, trade etc. Now, Vietnam is a nation which has good ties with Russia, it voted against the UN resolution which called on Moscow to withdraw its military operation in Ukraine and is also the chief adversary of the US which invaded it just like Haiti on the falsehood of communism’s domino effect.

Haiti, which is in a deep economic crisis, is beginning to understand that being on the side of Washington will only escalate its problems and threaten its sovereignty, therefore now it is moving close to those nations which are allies of Russia. Haiti’s foreign minister’s visit to Vietnam and statement which praised the relations between the two nations, is a way to indirectly tell Moscow that it too wants to be an ally.

Until now, Haiti has seen regime change, political assassinations and invasions at the hands of the US, therefore it is considering going away from its dominance and seek partnership with Putin, who, unlike Biden, will not steal its resources and hinder its development.