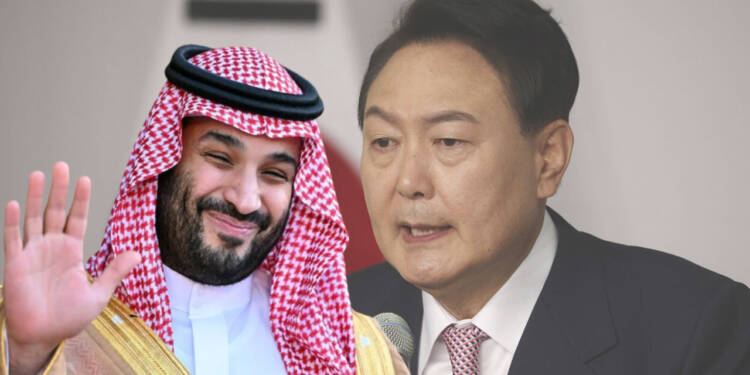 South Korea is relentless. After Europe, Seoul has now penetrated into another US fort. The US markets of weapons are slowly but steadily finding Seoul more appealing than Washington.

As Biden continues to destroy US’ relationships with his allies, South Korea sees it as an opportunity. And this time Seoul has attracted a major US ally named Riyadh.

Around a week back, South Korea and Saudi Arabia struck a fresh multibillion-dollar deal. In addition, South Korea has paced up its efforts to increase its cooperation with the middle-east country which has been looking to diversify its economy. And in return, Saudi Arabia is also leaving no stone unturned to strengthen ties with South Korea the fourth-largest economy in Asia.

Mohammed bin Salman, the Saudi Crown Prince and Prime Minister, met with Yoon Suk-Yeol, the president of South Korea, as well as the CEOs of many Korean businesses, including Samsung and Hyundai, during his visit to Seoul on November 16.

The size of the agreements signed between the two sides was highlighted in the headlines of major South Korean news outlets, with some reporting that the crown prince’s visit could propel South Korea into an economic boom by signing deals for megaprojects like Neom, a $500 billion new desert city in Saudi Arabia.

According to the Seoul Economic Daily, 26 investment deals totalling 100 trillion won ($75 billion) were inked by the two parties during the visit, which lasted less than 24 hours.

As the relationship between Washington and Riyadh has soured, Saudi Arabia is looking for another weapon supplier to decrease its reliance on the USA. At the same time, Seoul has strived to increase its presence in the global arms trade, it is signing multibillion-dollar defence contracts in Europe. And that’s making the American defence industry uneasy.

According to Minister of Land, Infrastructure and Transport Won Hee-Ryong in a press conference earlier this week, the Saudi crown prince demonstrated “strong will in weapons industry cooperation” with South Korea during the summit with President Yoon Suk-Yeol.

Saudi Arabia hasn’t been preferred by South Korea earlier. But in March, after the Ukraine war, Saudi Arabia inked contracts with Korean defence businesses to acquire $989 million worth of weaponry. The Saudis have also found South Korea to be a more enticing source of weaponry following the brief US arms export ban earlier this year, which was followed by restrictions on the acquisition of Russian weapons following the invasion of Ukraine.

As the reports suggest, South Korean defence manufacturers are willing to send more weapons to Saudi Arabia. The Hanwha Defense Co., a subsidiary of the Hanwha Group, reportedly wants to sell Saudi Arabia weaponry such as the Biho-II anti-aircraft defence system.

Defence deals with South Korea are more appealing as they involve localised production and maintenance support, which have frequently appeared in Korean defence export contracts with other nations, such as Hanwha Defense’s $730 million deal to sell K-9 self-propelled howitzers to Australia.

According to the Korean government, exports of military systems from Korea increased by a factor of three to a record $7.3 billion last year from $2.6 billion in 2016, and the Export-Import Bank of Korea anticipates that this year’s shipments will surpass $10 billion.

The U.S. defence industry has taken notice of the contracts because of their enormous scale and promises of quick delivery. One industry source who works with several U.S. defence businesses said after South Korea struck a deal with Poland, “There is concern from U.S. industry that this won’t stop with Poland.” And Seoul is in no mood to stop.

The US will do anything to stop South Korea from impacting its war economy. But, till the time being, Yoon Suk-yeol has delivered a knockout punch to Joe Biden.