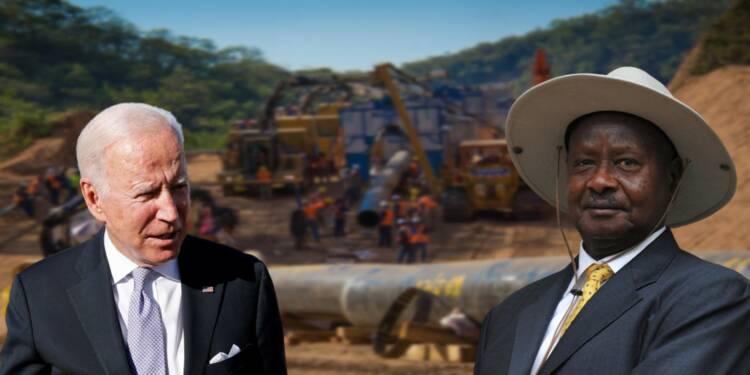 It a well-known fact, that the western countries stand to gain more from a sub servient Africa. The colonial mindset of the western nations is a chronic condition. The energy crisis in Europe has forced many Western nations to scramble for resources. Realising the importance of their resources and the need to be self-sufficient- many African countries have been taking steps to assert an identity independent from the West. Apparently, the West does not like it when an African country tries to act independent of the western diktats. But it becomes even more interesting when an African country finds an opportunity to beat the west in their own game.

The Russo-Ukrainian war has ignited the importance of resource rich Africa.  Both Uganda and Tanzania are endowed with rich resources, especially oil and gas. Uganda and Tanzania have forged ties and have laid foundation of the ambitious crude oil pipeline project called the East African Crude Oil Pipeline (EACOP) Project stretching 1,443km (896 miles) from Lake Albert in western Uganda to the Tanzanian port of Tanga on the Indian Ocean.  More importantly it is being constructed by a French company called TotalEnergies. The western world has been caught off-guard, with this independent move by two major African countries. Every trick in the book has been tried to create obstacles in the progress of this project. The desperation of the western world was evident when US climate envoy John Kerry made a public statement, discouraging African countries from encashing upon their natural resources as it would lead to severe climate damage.

After this trick boomeranged the 2 African countries did not budge, an old classic trick of hue and cry about human rights violations was used, that too hit the wall. Seeing the dedication of Uganda behind the ambitious project to meet its completion, the rattled west tried yet another trick. This time it was the EU Parliament’s resolution condemning the project on grounds of environmental damage, human rights violations and many more superficial grounds. With this act of condemnation, the west had it coming. The President of Uganda, Yowveri Museveni gave a befitting reply to EU, asking them to keep their advices to themselves. While speaking at the annual Uganda International oil & gas summit he said, “Some of these EU MPs are insufferable and so wrong that they think they know everything but should calm down”.

He criticised the west of being out of touch with reality and further went onto unmask the clandestine western agenda in the continent of Africa.

Old habits die hard and that is very much applicable on the western countries, they are slaves to their own vices. A manifestation of the vices could be found in the form of Environmental activists, religious figures, and believers protesting in Paris against the mega oil projects of the French group TotalEnergies in Uganda and Tanzania, a first action led by the movements Extinction Rebellion Spiritualities and GreenFaith.

It is important that our readers know that GreenFaith is an inter-religious NGO born in the United States, while Extinction Rebellion Spiritualities is a branch of the Extinction Rebellion movement, well known for its civil disobedience actions. Both the bodies are puppets being used for the furtherance of ulterior motives of the west.

In the backdrop of these events Uganda’s President Yowveri Museveni, is all set to attend the White House summit for African nations. Museveni can ask Biden to invest in this pipeline as most European banks have backed off from this project.

This will be an opportunity in disguise for both Biden and Museveni. The United States is already facing record high inflation, with high oil and gas prices being one of the major factors. Additionally, the US- OPEC+ relations have hit rocky terrain. This has diminished the US’ s hegemony over oil and gas supply across the world. The US too wants to secure its supply as well as have a dominant stake over supplies, getting involved in the EACOP project and shielding it from EU will end up being beneficial for both Uganda and America.

As already stated, the American influence and credibility in the African continent is on a decline and this could be the right moment for Biden to not only make a comeback, but also to gain access to one of the largest hot crude oil supplies in the world.

If this opportunity is wisely used by Uganda, it would be a tight slap on the face of EU, as would have been beaten in its own game of arm twisting to coerce other nations. With a cautious use of American shield, the Ugandans would be able to reverse the arm-twisting tactics of EU to their own benefit.