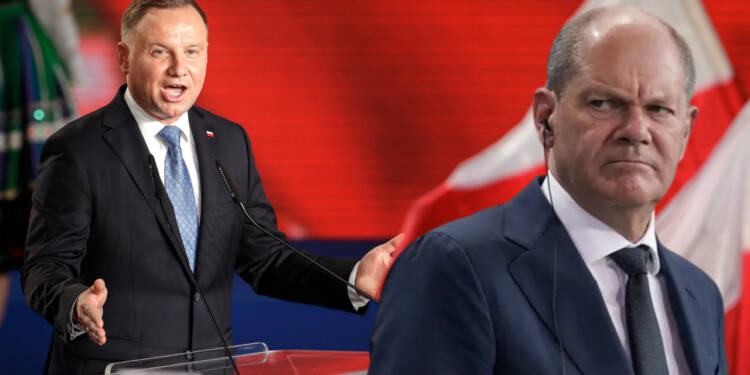 Many Polish people are still traumatised by the horrors of World War II, and as a result, they continue to despise Germans. The Polish ruling political parties have also actively encouraged this attitude from the very beginning.

Germany has consistently come under fire from the PiS party, whose two well-known leaders are Duda and Moraweicki. The situation changed significantly following the Ukraine War, and for the first time, we could speak of a warm relationship between Berlin and Warsaw. But, things are now returning to their original state. Yes, Poland has once more chastised and degraded Germany. But the reason behind this is not their collective hatred towards Berlin but the upcoming parliamentarian elections.

According to a media report by Politico, Poland is playing politics with the German Patriot missile offer. German officials reportedly believe that by offering to send Patriot anti-missile systems to Poland after that nation was struck by a missile that crossed from Ukraine, they were doing their ally a favour. However, Warsaw has reacted with abrupt changes in policy, tempered by a constant actually at Berlin.

For the unaware, on November 15, a missile hit the Polish border village of Przewodów, killing two. Everyone at first thought Russia deliberately attacked Poland. However, later, it was revealed that an errant Ukrainian air defense missile trying to knock down a barrage of Russian rockets entered Poland.

For helping Poland, Berlin last week offered two Patriot batteries — a U.S.-made surface-to-air system that costs about $1 billion per battery — as well as help in policing Polish skies with German Eurofighter jets. The initial response from Warsaw was straightforwardly enthusiastic.

Polish Defense Minister Mariusz Błaszczak said in a tweet, “I accepted with satisfaction the proposal of the German minister of defense regarding the deployment of additional Patriot missile launchers in our country,” “I will propose that the system be stationed on the border with Ukraine,” But in just two days, the mood changed, and Poland counteroffered, rejecting the original offer. Jaroslaw Kaczyski, Poland’s de-factor rule, told the state-run Polish Press Agency two days after Baszczak’s initial response: “It would be better for the security of Poland if Germans offered the equipment to Ukrainians.”

A few hours later, Baszczak followed suit in a tweet in which he reversed his initial position and demanded that Berlin should transfer the proposed Patriot batteries to Ukraine for placement at its western border.

Read More: “To hell with your war,” the Netherlands shows Biden his place and re-joins Putin

The Polish-German rivalry has returned to its original state. German Defense Minister Christine Lambrecht rebuked Poland’s claim stressing, “Patriots are an element of NATO’s Integrated Air and Missile Defense, which means they are to be deployed on NATO territory.”

Kaczyński responded by questioning Germany’s credentials as a NATO ally. Kaczyski stressed, “Germany’s attitude so far gives no reason to believe that they will decide to intercept Russian missiles,” Prior to this, Poland had also demanded WW2 reparations from Berlin which was also sharply criticized by federal authorities of Deutschland.

Poland leaders are again making Germany its punching bag as they have done for years. Make no mistake, Germany’s terrible history and misconduct of Polish people still works like a charm in elections. And the PiS party of Poland knows this. The party is attempting to improve its standing in the polls by using Germany as a convenient punching bag. They assert that Berlin sided with Brussels in the rule of law dispute, which led to the EU postponing payments to Poland from the recovery fund, and they are now pressing Berlin to make extravagant reparations for damage sustained during World War II.

Poland’s ruling PiS party is believed to have done a lot of damage to their voter base given the fact Poland worsened relations with Hungary and even exhausted almost every national resource just to thwart Russia.

Read More: ‘Divided we stand, united we fall’, NATO locks itself in a filthy war of words

And the parliamentarian elections in 2023 are quite important for PiS. This is the reason why Poland is again locking horns with Germany, easing up to Hungary and eventually even fighting the EU. But, that is definitely a facade. We suspect that once the PiS party regains control of the legislature in 2023, it will once more alter its course.