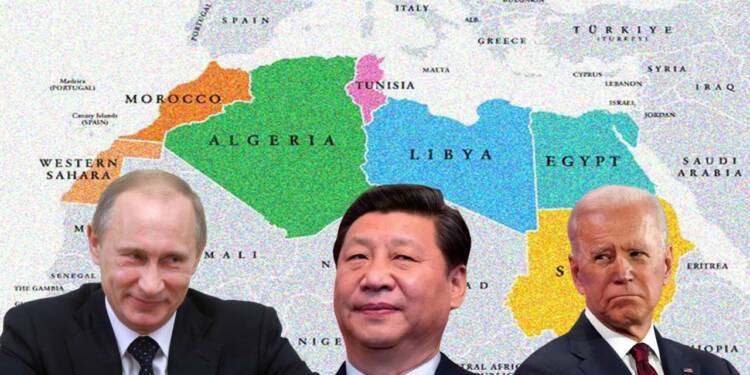 Mediterranean Dialogues conference 2023: The absence of robust support from many African states, notably during the Russo-Ukrainian conflict, baffles the leaders of Western countries. In contrast to simply bowing to the demands of more strong, rich states, many African nations have emphasised their right to protect their own national interests. A contemporary struggle for self-determination is being waged by the African nations.  This has gobsmacked Western countries all over. They are frantically trying to win over African countries. North Africa is the latest region that the West is expecting to rely on to sustain its dwindling influence in Africa.

Perhaps, this was just another attempt to improve the weaning influence of western nations in Africa. But this is bound to fail, as well.

You see, the Biden administration has deemphasized North Africa to the detriment of national interests. China and Russia are happy to fill the void. But now the Western nations are cursing themselves for ignoring North Africa.

The most significant regional development is Europe’s dramatic quest to diversify sources of natural gas and oil to reduce dependence on Russia. In July, the Italian government signed a series of agreements with Algeria. Little interest, however, seems to have gone into gaining the confidence of Libya.

Libya continues to be buffeted by both internal conflict and the competing influences of outside powers in the Middle East and Russia. While Russia has been distracted by its war against Ukraine, including diverting resources from its shadowy military contractor, the Wagner Group, Russia is still keen to continue to exert influence in Libya and the region.

Moreover, Tunisia was a potentially attractive regional security partner for the U.S, despite the large numbers of foreign fighters that ISIS had from Tunisia, the government strived to fight terror and secure its own borders.

The U.S. and Tunisia quickly advanced bilateral relations and strategic dialogue, including a nascent discussion of a trade agreement. More recently, however, a political turmoil in Tunisia has grown coupled with the rise of anti-Americanism. A recent Arab Barometer survey of Tunisia found that only 45 percent Tunisians agree with the statement that Americans are good people regardless of U.S. foreign policy– an 11 point drop from the previous survey. Tunisians are increasingly turning toward American’s rivals— Russia and China— for support.

The challenge for the U.S. is to help the country come out from economic stagnation and to control Beijing’s influence. However, Washington is showing little interest in committing to that effort.

In contrast to the troubles in Tunisia and Libya, Morocco has been a proven and productive partner for the U.S. It also increasingly engages with Israel. Washington seems content to rely on this relationship to oversee its general situational awareness and engagement in the region. However off late, even Morocco has shown signs of discontentment with West.

Egypt’s situation is no different. Previously, Egyptian President El-Sissi supported the US and Europe; he no longer does so. Joe Biden frequently has shown ignorance concerning Egypt. Biden has repeatedly made judgments and words that indirectly undermine the independence of Egypt and/or its allies. Another reason Egypt distanced itself from the West was America’s accommodating approach toward Iran.

To be clear, the relevance of sociopolitical freedom and self-determinism in the contemporary geopolitical environment is beginning to dawn on African governments. They have begun to push back against any attempts by the West to obstruct Africa’s development. Pan-African opposition to Western imperialism is growing.

Thus, the most likely situation is that U.S. interests in the region will continue to suffer. Specifically, greater expansion of Chinese influence can be expected, commensurate with Beijing’s overall priority of enlarging its footprint on the continent, absent meaningful pushback or competition from the U.S. or Europe.