the leader of Saint Vincent and the Grenadines stated enough is enough, he decided to call out Washington in a way which clearly articulates that the Caribbean country is not going to sit and watch its ally Cuba’s further victimisation. 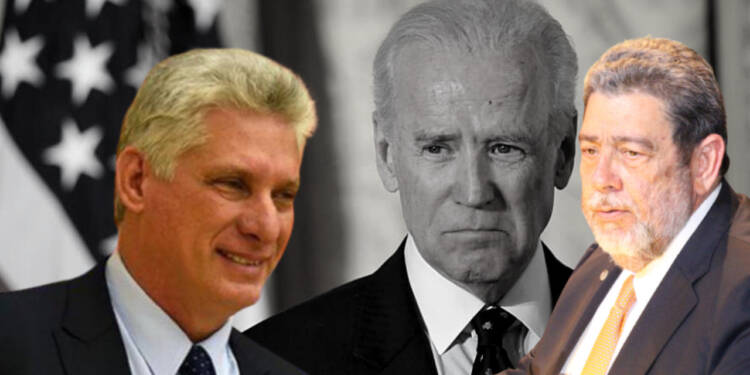 The Prime Minister of Saint Vincent and the Grenadines, Dr Ralph Gonsalves, has condemned the US for spreading misinformation against the Cuban government of president Miguel Diaz-Canel. His statement came in the wake of a meeting with Diaz-Canel, who is on a visit to the Caribbean nation for three days.

Gonsalves said that the US has absolutely no idea of the generosity of Cuban people and due to lack of awareness the Biden administration is circulating falsehoods against Cuba. He also brought the issue of human trafficking, which the West and its allies have falsely accused the Cuban regime of financing.

Praising the Cuban government and the people, Gonsalves emphasised that they have willingly helped his nation from time and time and asked the US regime that it can do the same rather than spreading propaganda against Cuba.

He said, “So I make this plea to my American brothers and sisters, leave Cuba alone in its internationalist humanitarian mission. I make bold to say that since the dawn of civilization there is no country in the world, no people who have been as selfless as revolutionary Cuba and its people.”

Crimes committed by US

For a long time, the US has terrorised Cuba. Ever since the establishment of a socialist state by revolutionary leader Fidel Castro, who came to power after overthrowing the regime of US puppet Fulgencio Batista, the US has unlawfully interfered in the internal affairs of Cuba. Castro established ties with Russia, then the Soviet Union. In response, the US imposed an embargo on Cuba banning all trade with it. This led to adverse implications on its economy, in fact Cuba has lost around $130 billion in the last six decades. However, the US resumed its vengeance against Cuba with Ronald Reagan designating it a state sponsor of terrorism.

While George H.W. Bush enacted the Cuban Democracy Act, which enhanced the US sanctions on Cuba. Washington strategically did this following the disintegration of the Soviet Union in 1991, which was an ally of the island country. The legislation implemented by the Bush administration was extremely unjust as it banned ships that have exchanged goods with Cuba from docking at US ports and forbade the foreign subsidiaries of American companies from dealing with Cuba.

Read more: Saint Vincent and The Grenadines ditches US and re-dials Venezuela

Victims in the Caribbean

Similarly, the US sanctions on Russia hurt the economy of Caribbean countries. It is a fact that the unjust economic measures put on Moscow are also having adverse repercussions on the economies of nations like Jamaica.

Rusal, which is a Russian aluminium corporation, is under sanctions from the US and Europe. In Jamaica, Rusal owns 93% of operations of the mining company, WINDALCO, and produces 1.95 tonnes of Bauxite. However, ever since the implementation of sanctions on Russia, these companies suffered massive losses.

However, in the backdrop of countless aggressions of the US in international affairs, Caribbean nations like Saint Vincent and The Grenadines and Trinidad and Tobago are strengthening their relations with Cuba.  The former even condemned American politicians for not only spreading lies but also capitalising from Cuba during the elections.

Joe Biden is under the illusion that he can dominate Caribbean nations and their allies by threatening sanctions or putting them on the FATF grey list. But their leaders know that Washington is not in a position to do any major harm considering its weak economy and failed foreign policy, therefore they are putting up a fight against its supremacy which have legitimised the destruction of countries like Cuba.