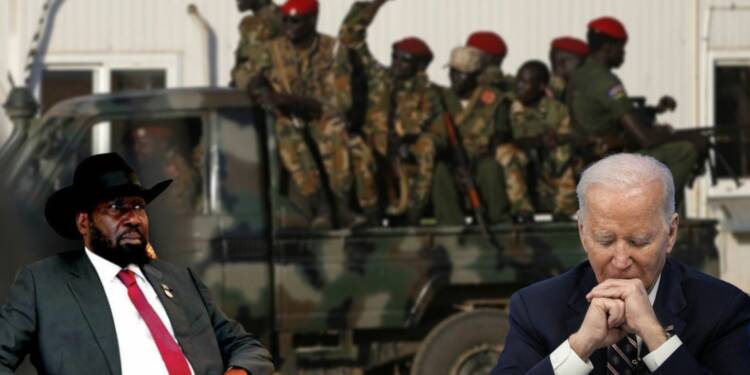 South Sudan military to DRC: The US has lost a lot of its influence in the Horn of Africa and now it risks losing ground in the region completely. More and more African countries are today trying to liberate themselves from the shadow of the West and are coming together to solve their regional problems by forging regional alliances. The struggle for self-determination by African nations has thwarted the West’s divisive agenda. The West has also witnessed major setbacks in the geopolitically important Sahel region where countries like France has had to end its military commitment and was virtually driven out of the region.

After his failure in the Horn of Africa, Biden had pinned his hopes on South Sudan. We had told our readers earlier how the US has used its carrot and stick approach for South Sudan to get it on its side. However, now South Sudan has also delivered yet another shock to the US’s crumbling hegemony in the region.

Now, military of South Sudan has said that more than 700 personnel will travel to eastern Congo to join a new regional force in trying to calm the latest deadly insecurity there. The spokesman for military of South Sudan, Maj. Gen. Lul Ruai Koang, told the Associated Press on Monday that, the government is working to provide the 750 troops with needed equipment for the combat mission, but he said sanctions on the country are complicating that effort.

It is to be mentioned here that, leaders of the seven-nation East African Community resolved to create and deploy a regional force to eastern Congo, to fight against the armed groups active in the region.

However, recently the game-plan of US to perpetually keep the pot boiling in this region has faced considerable resistance because of the coming together of the African nations to defeat the evil forces.

Specially after the West’s Sahel debacle, it is looking for new pastures to somehow cling on to, which can help it to maintain its dominance in the region and stay relevant in the geopolitical arena.

Here, South Sudan was the country that the US had pinned its last hopes. For the longest time, it used its carrot and stick approach to woo South Sudan. Recently we saw how South Sudan was to receive $112.7 million in emergency funding from the International Monetary Fund (IMF) to help address food insecurity, support social spending and boost its diminishing foreign reserves. At a time, when the West was trying to win the country’s trust. This couldn’t have been just a coincidence.

On the other hand, Amnesty International had urged the African Union to take “long awaited” steps toward creating a promised war crimes tribunal to try atrocities committed during South Sudan’s bloody five-year conflict. Which was nothing but the West trying to bully South Sudan and distort global perceptions to suit its own agenda.

However, nothing seems to have worked to make South Sudan “fall in line” and now it has defied the Western agenda and has decided to send its military troops to DRC, which surely will be an utter disappointment for the West yet again. This further goes to show that the Pan-African opposition to Western imperialism is growing an unprecedented pace and the Africa is no longer willing to let the West meddle in its affairs.