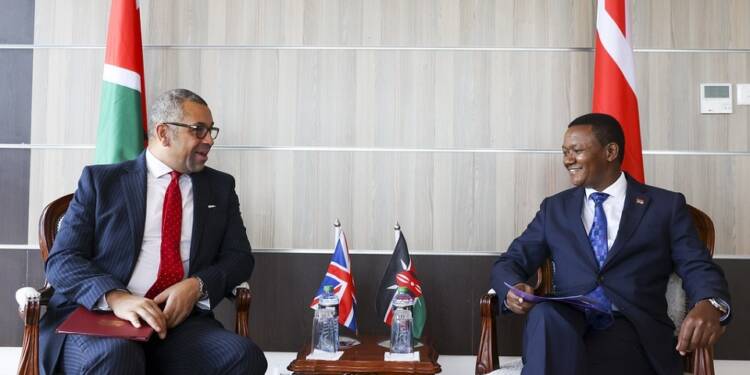 UK investment in Africa: In the wake of the Russia-Ukraine war, the West is facing an extremely difficult and uncertain economic situation. Energy crisis in Europe has worsened and its people are also facing a cost of living crisis. The situation deteriorated so quickly that possibilities of a recession loomed large on Europe. Ironically the sanctions against Russia had backfired and it left the West gasping for gas. This precarious situation of the West and its energy crisis has forced it to look to Africa. It expects Africa to come to its rescue. Many of European leaders are running to Africa for help and are trying to woo the resource-rich African countries to secure energy supplies.

However, in these times of geopolitical realignment the West is gradually losing ground and is facing a credibility crisis in Africa. At a time when the West needs Africa the most, this situation doesn’t bode well for the continent. Thus, UK is now committing major investment in Africa to somehow stay relevant.

In a recent development The Foreign Secretary James Cleverly has announced new UK support to Africa during a visit to Kenya and Ethiopia.

The UK will announce new support for the African Development Fund (ADF) today to help the poorest communities in Africa grow their economies, create jobs and improve healthcare.

Further, The UK will contribute £650 million as part of a wider international financing package of $9 billion for the ADF over the next 3 years, providing high impact and low-cost finance to Africa’s poorest countries. This includes £200 million provided to the ADF’s new Climate Action Window that was announced at COP27.

The UK funding is expected to help deliver electricity for almost 20 million people, improved sanitation for over 30 million people and create over 2.3 million new jobs across the continent. The fund supports 37 of the most vulnerable countries across the African continent.

While historically, Africa had a very unequal relationship with European powers who built their cities on African wealth, this is a major change which puts Africa in an advantageous position. As Europe begs their way into Africa, now the bargaining chip lies in the hands of Africa and the West can’t dictate their terms to Africa.

Many European leaders have already been sent to Africa to secure new deals with the continent, especially to find alternatives to Russian natural gas. In September, Poland’s president went to Senegal in pursuit of gas deals. In May, the German chancellor, Olaf Scholz, too sought the same thing.

The US is already battling its own battle of maintaing its dominance in the region which it is clearly failing as it has been virtually kicked out of the Horn of Africa countries. Further, we have also told our readers about the US-China Battle for Cabo Delgado’s Graphite which is still going on in Mozambique.

Thus when major European powers have made such overtures to Africa, it seems the UK doesn’t want to be left behind especially after Brexit and its own phase of economic downturn.

This perfectly explains the assurance from the UK Foreign Secretary of “honest, reliable UK investment in Africa”.

Only last month, South Africa’s government too announced a partnership with the UK on health and science domains. Its President Ramaphosa also met the the UK Prime Minister, Rishi Sunak, and attended a business meeting where he held talks on issues of trade and investment.

Thus, it is evident that these investments in Africa have been necessitated by the fact that UK is itself struggling with its decling economy and it urgently needs Africa to secure its own needs in dealing with its energy crisis. The whole of Europe is caught in an energy crisis and are hungry for alternatives to Russian gas and the UK’s situation is no better. There were reports that the UK was facing “significant risk” of gas shortages this winter. Further, the U.K. economy contracted by 0.2% in the third quarter of 2022, which could be the start of a long recession.

Now the UK promising to flood Africa with investments is nothing but a desperate attempt to try to get Africa on it side so it can secure its own needs before the country descends into further  economic disaster.