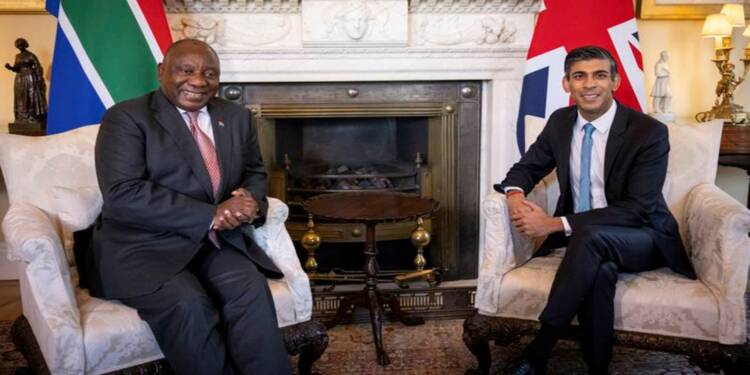 South Africa’s President Cyril Ramaphosa’s rise to power was the result of his predecessor Jacob Zuma’s resignation. Ramaphosa, who led an election campaign which focused on corruption in the nation, made sure that Zuma is convicted and sent to jail. However, Zuma, who was sentenced to fifteen months in prison, was released within two months.

After coming out, he announced that he will be standing in the next Presidential elections of South Africa. But all his plans were dashed when an appeals court of South Africa ruled that his release was illegal and he must go back to jail. This provided a relief to Ramaphosa but not for too long as the former Health Minister from Zuma’s regime, Zweli Mkhize, decided to enter the political scene.

Although ANC voted in favour of Ramaphosa in the endorsement race of the party president but still his career is threatened by corruption scandals.

Now it seems like Ramaphosa is on a path to save his reputation in South Africa by visiting foreign countries and signing agreements and MoUs to portray himself as productive for the nation.

In this bid, on Wednesday, his government announced a partnership with Britain on health and science domains. Ramaphosa also met the newly minted Prime Minister, Rishi Sunak, and attended a business meeting where he held talks on issues of trade and investment. Ramaphosa commended London for its assistance on decarbonising the African country.

Taking this into consideration, South Africa has announced its plan to attract an investment of $250 billion in its green hydrogen industry by 2050 at the international climate conference COP27 being held in Egypt.

South Africa’s domestic issues have prompted it to pursue the route of green hydrogen. After the Ukraine-Russia crisis the price of fossil fuels skyrocketed and led to an energy crisis.

The impact in South Africa has been massive as it is dealing with unprecedented electricity blackouts, the state energy company Eskom is entangled in deep problems. In July, many households experienced power cuts for atleast six hours a day. Similarly, as per Statistics South Africa, fuel prices have skyrocketed in the nation and are main factors behind the inflation. In June, 2022 fuel prices were 45 per cent higher than last year.

The nation is too much dependent on coal for basic necessities. So much so that the US, France and Germany pledged that they will provide with $8.5 billion to replace its coal-fired power plants with renewable energy. Unfortunately, the funds were never released because of South Africa’s plan to allocate $3 billion from the funds for its electric vehicle industry which perturbed the West.

But with the arrival of green hydrogen, South Africa can generate millions of jobs and $30 billion in annual revenue, as per Masopha Moshoeshoe, who is a green economy specialist in the country.

He presented South Africa’s green hydrogen plan at the COP27 Summit. The plan noted that with the arrival of green hydrogen, the country can supply ammonia, which is manufactured using hydrogen, to the global market. It also stated that South Africa can satisfy the domestic demand for cooking, automobile indsutry and also the dilapidated power sector.

The role of green hydrogen is gaining significance due to its necessity in diverse sectors and industries which include manufacturing sector, steelmaking, cement production, fuel cells for electric vehicles, green ammonia for fertilizers, cleaning goods, and heavy transport among others.

South Africa’s geographical advantage and industrial capabilities give it an advantage to develop its green hydrogen industry. It has abdundant wind and solar resources and a suitable environment for the growth of renewable industry. Its mining sector and the organised system of public-private partnership are factors which can facilitate the production of green hydrogen production in the country.

If everything occurs accordingly, South Africa will not have to rely on traditional fossil fuels for power generation. It will not have to depend on countries such as the US, Germany and France for energy requirements as green hydrogen will bring self-sufficiency in addition to financial prosperity and a clean environment.