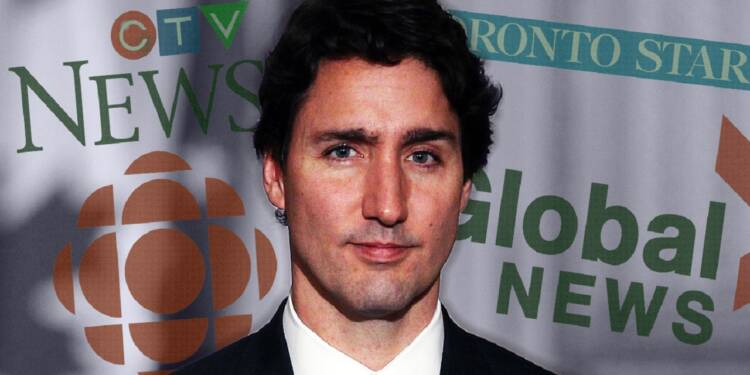 When Canadians today are asked where they get the news about what’s happening across the country, majority of them will respond that they no longer consume news from mainstream media. They now get better Canadian news from foreign news sources. This is the real and sorry state of Canadian media, the media freedom index may claim that Canadian media is independent and free, but without a doubt, it’s not.

Four days ago, we at TFI Global-Canada produced a video about CBC’s admiration for Trudeau and how they have consistently promoted liberal agenda in the name of journalism. The video was just the beginning. You might think CBC is the only one that promotes Trudeau’s agenda. But, CTV is CBC on steroids.

The CTV Television Network also referred to as CTV, is a prominent English-language television network in Canada. The largest privately owned television network in Canada, CTV was established in 1961 and was purchased by BCE Inc. in 2000. It is now a part of the Bell Media division of BCE and currently covers all the important political updates of Canada. However, just like CBC, CTV is also chastised by average Canadians, for gaslighting people to impose upon them Trudeau’s agenda.

Right now, Justin Trudeau is the sole focus of Canadian media. Here are several instances that demonstrate how CTV is at par with other media outlets when it comes to Trudeau endorsement.

Getting angered by Freedom Sweatshirts

Just a week ago, Canadian PM Justin Trudeau failed to justify the need for imposing an emergency in Canada. Since then, the freedom protestors are up in the air. However, Canadian media is leaving no stone unturned to justify Trudeau’s actions. A CTV journalist got provoked by a freedom hoodie almost a week ago. Reportedly, Glen McGregor came across an under-armor hoodie that was so upsetting for him that he felt compelled to share a photo of it on Twitter.

At the Under Armour store at the Tanger outlet mall in Kanata. pic.twitter.com/RurLfn3iKG

For the majority part of Freedom Convoy demonstrations, McGregor was present in Ottawa, and in the months since, he has continued to report on the fallout. Mr. McGregor was allegedly utterly biased in his reporting towards protesters and concurred that Trudeau’s use of the Emergencies Act was “a really unusual step.” However, he did describe the trucker’s protest as an “occupation.”

When Trudeau failed to justify his act of emergency in public hearings, CTV, CBC and Global news issued a Nanos Poll which literally had no proof to justify Trudeau’s acts. A media report was published that Most Canadians back the federal government’s invocation of the Emergencies Act during the ‘Freedom Convoy’ protests. But, dear CTV, how are you nullifying your own previous report?

Just a week before, CTV had issued an online poll in which 78% of Canadians opposed Trudeau’s emergency invocation. In just one week, did the Canadians get enlightened or what?

Giving a guilt trip to Canadians

Truth be told there should be equality and prosperity for all. But, just like Trudeau, CTV has also never fallen short of reminding Canadians how gloomy their history was. For instance, CTV once reported and promoted that Canadians should apologize to black people, because, not apologizing would be another “specific form of anti-Black racism”

This media report, regrettably, is uniquely stupid. Let’s go back to 2019 when CTV accused conservatives of being behind a social media movement calling for Alberta to secede from Canada. According to a public relations firm, CTV reported that the separatist movement in Alberta that has swept social media since the Liberals won a minority government was partly created by Conservative bots and data aggregators.

No questions to master Trudeau

Also, almost every liberal media of Canada is visibly promoting Trudeau’s climate agenda and green energy. Go to CTV, and just search green, you will literally find 100s of articles and videos embracing Trudeau’s climate agenda. But, the darker side of the story is when Trudeau himself is responsible for carbon spillover, and the media gets schtum.

Using his CAN FORCE ONE, Trudeau flew from Ottawa yesterday. Whenever Trudeau travels abroad, this plane is typically used. The cute face leader, however, was actually headed to the CBC studio.

Tonight Trudeau hopped on the government plane and jetted to Toronto to appear on a CTV News toy drive. These clowns try to starve us and freeze us out with their carbon tax and spew out more carbon in a day than most of us in a year!!!!!!!! pic.twitter.com/s3GpEO9fjU

The mysterious trip taken by the PM ended up in his guest appearance on a show called Toy Mountain aired on CTV. He didn’t put this trip on his schedule until 6:30 this evening.

CANFORCE ONE returning to Ottawa

The PM's mystery trip to YYZ earlier today turned out to be an appearance for CTV's Toy Mountain. This trip wasn't on his itinerary until 6:30pm this evening. pic.twitter.com/aE9GyFG2hf

In addition, how much carbon Trudeau created, CTV should have asked.

In order to have a true democracy, the government should not own, support, or finance the media. But in Canada, Trudeau is trying to hide the fact that he has given billions to CBCNews and CTV. The only way to save Canada is to ensure accountability of media to the people, keep a check on their political affiliations and make them work ethically; otherwise, it will undoubtedly turn into Trudeau’s empire of manipulation and lies.