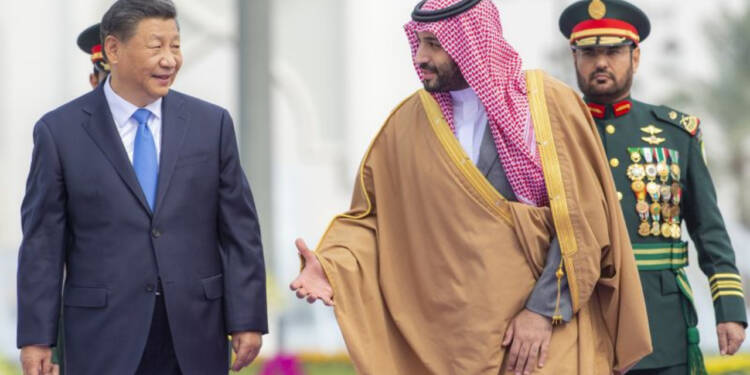 All wars are terrible human tragedies, but some also have profound impacts on the world’s economy and finances. One such war is Russia’s invasion of Ukraine. It has exposed the volatility of the US dollar and the fact that it has been weaponised by the US. Now, Saudi Arabia and China have come together against the hegemony of the US petrodollar.

As part of a tour intended to strengthen political and economic ties, Chinese President Xi Jinping and Saudi King Salman have signed a number of key agreements. The United States has keenly monitored Xi’s three-day trip to the kingdom, which includes summits in the Arab and Gulf regions, as ties between Washington and Riyadh are at an all-time low. On Thursday, Xi was brought to Yamamah Palace by the Saudi Royal Guard Regiment, who were riding horses and carrying Chinese and Saudi flags, and they later signed a “comprehensive strategic partnership agreement” there.

When Riyadh and Beijing meet nothing matters more than the oil. At the palace, the king’s official residence and location of the royal court, Crown Prince Mohammed bin Salman (MBS), the de facto ruler of the world’s largest oil exporter, welcomed Xi. A new era in relations was announced by the Chinese leader.

The largest crude oil importer in the world, Saudi Arabia is a major supplier to China. In a move that has sent shockwaves throughout the global markets, Saudi Arabia and China have discussed a major currency exchange deal that could drastically reduce the influence of the petrodollar. The petrodollar, which is the currency used to purchase and sell crude oil, has been the mainstay of the Saudi Arabian economy and has been a major factor in the global economy for decades.

The new agreement between Saudi Arabia and China will see the two countries exchanging currencies in order to facilitate trade between the two nations. This means that the Chinese Yuan will now be accepted as payment for Saudi Arabian crude oil, instead of the US dollar. This move is seen as a major shift away from the petrodollar and could have significant implications for the global economy.

The Saudi-China agreement is being seen as a way for China to reduce its reliance on the US dollar and gain more control over the price of oil. As the world’s largest importer of crude oil, China is heavily reliant on the US dollar and has been increasingly looking to diversify its currency holdings. The new agreement will allow the Chinese to buy oil using their own currency, which could help to reduce the volatility of oil prices.

Also Read: The rouble effect catches on with ASEAN nations as dollar continues its decline

The move away from the petrodollar is also likely to have a significant impact on the US economy. The US dollar has traditionally been the currency of choice for international trade, particularly in the energy sector. However, this new agreement could see the US dollar losing its dominance as the world’s reserve currency and could lead to the weakening of the US economy.

Switching from the dollar to the Yuan at these times is becoming necessary due to the “increasing weaponization of the dollar-dominated financial system,” and it would bring confidence to bilateral commerce and weaken the U.S. currency’s monopoly over the world oil market.

As Riyadh had previously threatened in response to potential U.S. legislation opening OPEC members to antitrust litigation, any decision by Saudi Arabia to abandon the dollar in its oil trading would be a seismic political move.

The agreement between Saudi Arabia and China could also have a major impact on the global oil market. As the two countries are the two largest producers of oil, any changes in the pricing of oil could have a ripple effect on the entire market. This could lead to a decrease in the demand for US dollars, which could further weaken the US economy.