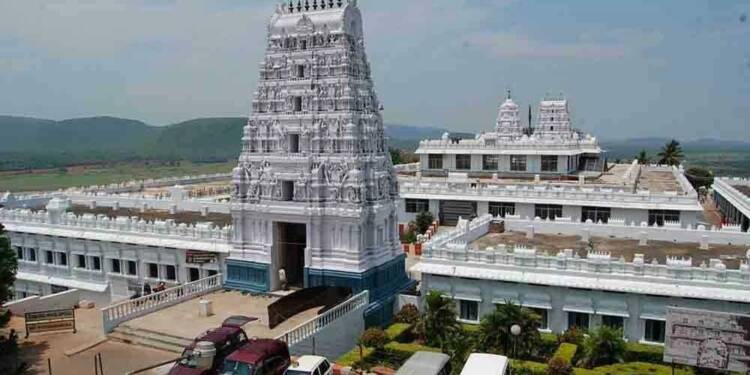 Such a holy and famous temple of Hinduism comes at the top of the hill Ratnagiri. There is an old story behind why that hill was named Ratnagiri. In purans It is said that once Meruvu, the god of the hills and his wife Menaka together did a severe penance to Lord Vishnu. Lord Vishnu was pleased to see their harsh penance and blessed them with two sons. The name of one of them was Bhadra and the name of the other was Ratnakar.

After some time god Came in Ramnarayan’s dream and asked him to build a temple of mine. Because of that he constructed the temple of god in the year 1891.

Architecture of the temple

The main Annavaram Temple here is built in the form of a chariot and has four wings. The structure of the temple is built according to the Agni Purana so that it looks like nature. The temple is shown in the form of a chariot because that chariot represents the seven worlds of the world and at the top is the sanctum sanctorum of the Lord, where the Lord seems to be driving the whole world.

Apart from the Annavaram temple, there are other important Lord Shri Ram temples and temples of Van Durga Devi and Kanaka Durga Devi here and they are worshiped with great devotion.

Kalyan Mandap and Gauri Kalyan Mandap have been made in front of the temple for the convenience of the passengers. Both the pavilions are also built in the new architecture.

In July 1943, in the northern direction of the temple, people can know the time, that is why a clock similar to the one in Delhi’s Jantar Mantar can be seen here in the form of ‘sun dial’.

A school of Vedas has been arranged in the premises here so that all the students of Brahmins can study here. The facility for their stay and food is also available in the school. Discussions on religious matters are organized here on the days of welfare and on the days of festivals.

How to Reach Annavaram temple

By Air. Nearest Airport: you can easily reach here by aeroplane. The nearest airport is at Rajahmundry – Rajahmundry Airport which is 72 Kms away from here. You can get direct flights to Rajahmundry from any part of the country.

By Bus. You can also reach here by bus. Nearest Bus Station is Annavaram Bus Station which is at 2 Kms from the temple. There are many direct buses running to Annavaram.