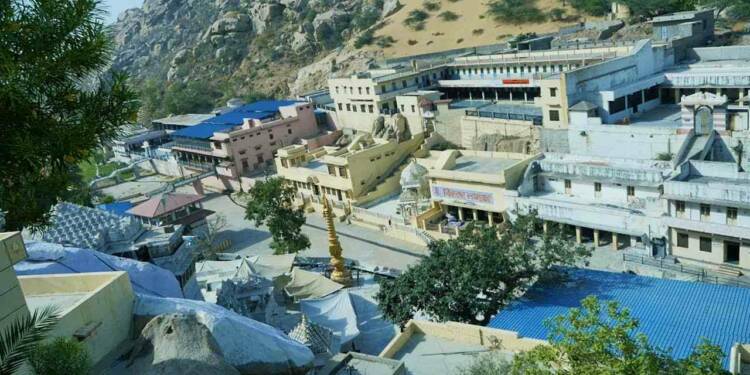 Sundha Mata Temple is a 900-year-old temple dedicated to Chamunda Devi situated on a hill named Sundha, located in the Jalore district of Rajasthan. The temple is only 64 km from Mount Abu and 20 km from Bhinmal Nagar. Situated at an altitude of 1220 meters in the hills of Aravalli, this temple of Chamunda Devi is a holy and religious place for the devotees.

The environment near the temple is very fresh and attractive. This temple is made of yellow sandstone of Jaisalmer which attracts everyone with its beauty. Here only the head of the mother is worshipped. Bhureshwar Mahadev is situated in front of Mata. In this way both Shiva and Shakti are established on Sundha Mountain.

The workmanship done on the marble pillars in the temple of Sundha Mata reminds one of the pillars of the Delwara Jain temples of Abu. There are three historical inscriptions inside this temple which tell about the history of this place. The first inscription here is from 1262 AD which describes the victory of the Chauhans and the fall of the Parmars. The second inscription is from 1326 and the third from 1727.

The best time to visit Sundha Mata Temple is from October to March. The winter season is a favorable time to visit this region. Being a desert region, Rajasthan is extremely hot in summer, due to which traveling in this season should be avoided. It is not right to travel here during the rainy season. That’s why you should visit this temple only in the winter season.

Jalore Fort: Jalore Fort is the main attraction here. This fort is an impressive piece of architecture. It is believed that this fort was built between the 8th and 10th centuries. The fort is surrounded by a steep hill at a height of 336 meters.

Topkhana (canon fort): Topkhana is situated in the middle of Jalore city which is also a major tourist attraction. This Topkhana was once a grand Sanskrit school that was built by Raja Bhoj between the 7th and 8th centuries. The stone carvings of the Topkhana attract tourists immensely.

Sarai Temple: Sarai Temple is one of the main temples of Jalore. This temple is situated at an altitude of 646 meters on the Jalore Mar Kalshchal hill. In honor of Maharishi Jabali this temple was built by Rawal Ratan Singh.

Also Read: Bhadrakali Temple Warangal & History, and how to reach

How to reach Sundha Mata Temple

By Air- The nearest airport to Jalore is in Jodhpur which is located at a distance of 140 kms. The airport is well connected to Mumbai, Delhi and other major metros of the country.

By Road- You can also travel to Sundha Mata Temple by road can easily reach this tourist city from cities like Jodhpur, Jaipur, Ajmer, Ahmedabad, Surat and Mumbai.

By Train- You can also reach Sundha Mata Temple by train by taking trains from Jodhpur Division Network, Mumbai and Gujarat to Jalore Railway Station.