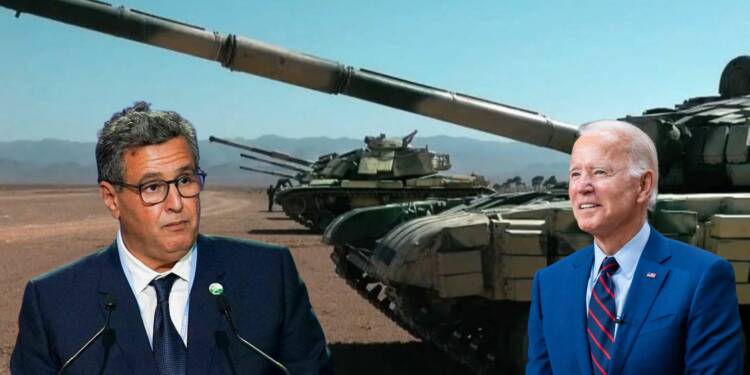 Morocco Military Aid: No end is in sight to the Russo-Ukraine conflict. The United States has already earmarked substantial sums of money for Ukraine, which it will likely require for years to come. Thus, after successfully persuading a number of Eastern European nations to give Ukraine Soviet-era military hardware, the US has now expanded the mission to Africa.

According to recent reports, Morocco, on the recommendation of the United States, will deliver spare parts of T-72 tanks and military aid to Ukraine.

To assist Ukrainian forces, the US was searching for T-72 tanks in April of last year. In the West, these tanks are becoming increasingly hard to find. Washington was in talks with its NATO allies about sending T-72s to Ukraine in response to a request from President Volodymyr Zelensky, who wanted to bolster his defences in the Donbass in particular.

The Royal Moroccan Armed Forces have several dozen tanks of the T-72B/BK type, acquired between 1999 and 2001 from Belarus. In July 2015, the Ukrainian public company Ukroboron service asked Morocco for spare parts for its T-72 tanks. Kyiv is therefore used to working with Rabat on this subject.

But the American request made to Morocco places, in fact, Morocco on the side of Ukraine. During the vote at the UN General Assembly last March on the resolution “condemning Russian aggression in Ukraine”, Morocco had abstained from voting, preferring to be absent than to take a position. In March and April, the kingdom had done the same to avoid positioning itself against Russia.

But soon the kingdom renounced its neutrality and  took part in a meeting with 40 allies of the United States, all NATO members and several guest countries, in Germany to discuss increased military aid to Zelensky’s government.

This shift in perspective can be partially attributable to the increasing comradeship between Algeria, Morocco’s bitter foe, and Russia. The increase in Algeria’s defence imports from Russia from $7 billion to $17 billion has raised concerns in Rabat. It may be a strategic decision on the part of Morocco to abandon its neutrality and form an alliance with the West.

Furthermore, the US-led Western bloc has been courting Morocco to join it for months now. In the past, the West has backed both Algeria and its arch rival Morocco. However, the US and Europe are endeavoring to entice Morocco to join their side after Algeria defected to the Russian camp and refused to obey the orders of Biden and his cronies.

Be that as it may, Morocco’s political transformation is likely to have both domestic and international effects on Africa and the Maghreb area. Rabat is a significant market for Russian exports, particularly those of hydrocarbon derivatives, commercial cars, food, machinery, cosmetics, and grains. Morocco has reciprocated by exporting agricultural supplies, fish, chemicals, and fertilisers. The Alawi kingdom is now Russia’s top commercial partner in Africa with a total trade balance of $1.6 billion.

Several factors could cause this condition to change. Russia has demanded that foreign customers pay for the commodities they import in roubles. Bartering had been suggested as a possible strategy by Moscow and Rabat, but this is now in uncertainty as Morocco inches closer towards the US.

Second, Morocco’s agreement with the US position that “it is necessary to defeat Russia militarily, so that the Eurasian country does not constitute a danger to other countries” puts the Kingdom of Mohammed VI in a tricky position with the Kremlin, who may then react negatively within the UN Security Council on the issue of Western Sahara. The King Mohammed VI-proposed autonomy solution, which Pedro Sánchez’s administration recently acknowledged as “the only realistic and possible” way to finally end the conflict in the old Spanish colony of Western Sahara, has not yet been implemented. Russia has a number of playing cards up its cuff that it could use to thwart this.

Morocco’s efforts to maintain an autonomous foreign policy from the major powers at a time when the global crisis has worsened to the point that it may threaten the potential of a worldwide combustion of terrifying magnitude have been positive for the African nation, hitherto. Therefore, only time will tell how lucrative it would be for Rabat to give up its neutrality and facilitate American interests.