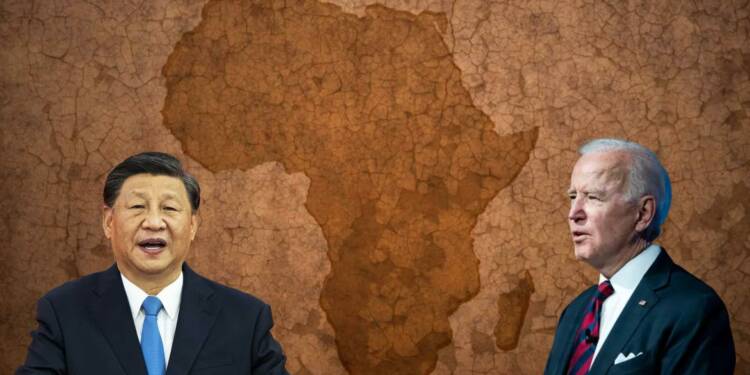 The US and China rivalry has reached Africa. As both the countries look to deepen ties with Africa the confrontations between the two countries have now become uglier.

Geopolitical importance of Africa has grown in recent times and both US and China are fighting for influence. China’s significant inroads into the continent has alerted the US and the recent US-Africa summit too is in some way or the other is an attempt to reverse the situation.

It can be said that along with building trust with Africa, China’s advances in the continent has also been an unstated focus of the US-Africa leaders summit.

A US-China war of words has ensued as the US hosts African leaders in Washington to resuscitate ties with the continent. Ahead of the US-Africa summit China’s ambassador to the US Qin Gang rejected charges that Beijing had mired African countries in debt and also cited a report that African countries owe three times more debt to Western institutions. While emphasizing that Chinese assistance to Africa is a benefit, not a trap.

The US has suggested that they are not asking Africa to choose between US or China, but has termed Chinese lending as “predatory” and warned that both China and Russia are destabilizing Africa with their growing influence.

Africa has witnessed a painful colonial experience. Now, history may repeat itself as it once again faces the threat of neo-colonialism from big powers. China needs resources to meet its energy imports and to sustain its manufacturing industry. However, it’s search for resources has often had devastating consequences for Africa. The most serious threat to Africa is posed by Chinese loans and the terms for collateral.

Many African countries like Zambia, Angola, the Democratic Republic of the Congo (DRC), Mozambique, Ethiopia, Sudan, Kenya and Djibouti among others were indebted to China and later handed over their assets or resources after they were unable to repay the loans.

In Zambia, China is already in control of the country’s broadcasting company, and the state is preparing to offer its national electricity company to China as security against another loan.

Similarly, Madagascar pledged a huge portion of its land as collateral for loans. Same goes for DRC, where China gained rights to extract up to 10 million tons of copper and 420 000 tons of cobalt over 15 years in return for loans.

Can Africa depend on the US?

If Africa then turns to US and become over-dependent, it would be like jumping out of the frying pan into the fire.

The West, specially the US is losing credibility in Africa. There is a growing trust deficit between the two. The US hosting African leaders as part of the US-Africa summit is to bridge this trust gap.

The US has long been creating troubles in Africa and is pitting Africans against each other to capture and loot its vast natural resources. For example, reports suggest that Nigeria is losing at least 400,000 barrels a day.

It is well-known how the US tries to capture Africa’s resources even at the cost of destabilizing nations. For example, in Ethiopia the US and its allies backed and funded the TPLF and wanted to create a separate nation to control the Horn of Africa region. Similarly, there are probable connections between CIA and the Boko Haram in Nigeria, one of the largest oil producing countries in Africa.

Further, there have been constant attempts to influence the outcomes of the upcoming Nigeria elections and the role of US behind it can’t be denied.

These are only some of the examples why Africa today has understood why over-dependence on the US can be fatal for them and anti-West sentiments have been growing in the continent. Combined with this, Russia and China making inroads into the continent has only made it more difficult for the US to maintain its hegemony in the region.

Although African leaders have embraced economic engagement with China, which is perceived as an alternative to its ties with the West African leaders, it must be cautious to not fall prey to China’s neo-colonial attitude and end up handing over strategic assets to the China.

Africa while forging ties with others must look for safeguarding its own national interests first. Today, Africa’s importance has grown because of its large reserves of resources. This gives an opportunity to the continent to hold the bargaining chip and use it for its maximum advantage. Countries like Mozambique, South Africa, and Botswana have shown how regional co-operation can keep the predatory foreign powers out of the continent while also using them for political and financial gains.

More and more African countries must come together and use this golden opportunity for their maximum benefit while not falling for any neo-colonial trap whether laid by China or the US.