The administration of U.S. President Joe Biden instructed Canada to lead the military intervention in Haiti. Prime Minister Justin Trudeau didn't instantly reject this suggestion, however, Trudeau is planning something 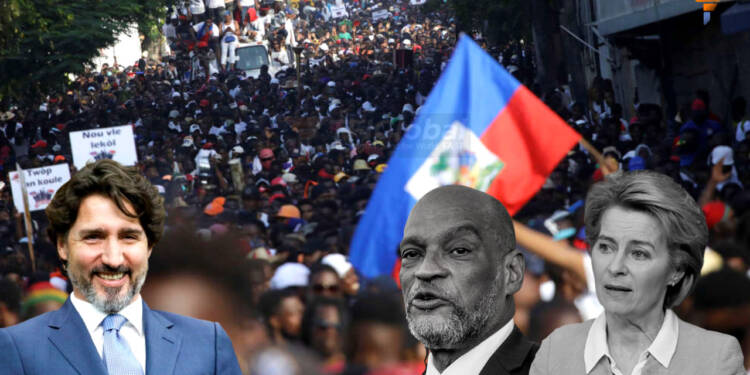 According to recent reports, Prime Minister Justin Trudeau has requested European nations to join Canada in sanctioning Haiti’s elites over alleged ties to the violent gangs paralyzing the country.

He also said Canada must avoid some of its past mistakes as it responds to a request from Haiti’s unpopular government for a foreign military intervention.

“We’ve had a long history in Haiti and we still find ourselves, 30 years later, in a crisis as grave if not worse than the others,” Trudeau said during a year-end interview with The Canadian Press.

He also mentioned that there needs to be a consensus across political parties in Haiti before we can move forward on more significant steps.

Over the years, Haiti has been the target of multiple invasions and international military interventions, including six UN operations since the 1990s. One of them came to an end in 2017 with a cholera epidemic caused by UN peacekeepers after a 13-year duration.

The nation is currently engulfed in much worse anarchy. Because of the nation’s unrest, violent gangs have taken over Port-au-Prince, its capital, and other crucial locations.

Henry’s government has asked for a foreign military intervention to create a humanitarian corridor, a move endorsed by the United Nations Secretary-General. United States officials namechecked Canada as a possible lead for such a mission earlier this year.

Now, Trudeau said Canada hasn’t closed the door on being part of a military intervention, or even leading one. But he said Ottawa has sanctioned a dozen high-ranking Haitian politicians and business leaders in an attempt to bring about lasting change.

“We haven’t taken anything off the table, but with 30 years of experience in Haiti, we know very well that there are enormous challenges when it comes to any intervention,” he said.

You see, Trudeau is conscious of the truth. There are absolutely no circumstances under which it would even be reasonably viable to undertake a friendly invasion of Haiti, given the Canadian military is beset by major shortages of almost everything and one of the worst manning problems in its history.

In order to address a staffing shortage that senior commanders are now referring to as a “crisis,” Chief of Defence Staff Gen. Wayne Eyre just last month ordered a halt to all non-essential activity across the Canadian Armed Forces.

And that’s on top of Canada’s typical equipment and logistical shortcomings. The Canadian military, for example, is unique among the G7 nations in that it lacks an expeditionary capability, which may affect its capacity to supply and equip an expeditionary force stationed on a Caribbean island.

Apart from this, it is evident that Canada doesn’t want to end up in a situation in Haiti like that of the US’ in Iraq, Afghanistan etc. Also, it is trying to create an image among the masses of Haiti that Ottawa is not eager to interfere in their internal matters.

So, now Canada has found an easier way out of all its concerns and responsibilities. That is, Europe.  You see, many European nations like France and Germany have been part of the “Core Group” that is very influential in Haiti and in many ways even runs the nation.

However, since the unrest in Haiti has started this time , these European nations have kept their mouths shut about the whole situation and have taken a back seat pushing Canada and US in the forefront.

By asking Europe to put sanctions on Haitian politicians and business leaders, Ottawa is trying to pass the buck to European nations and shrug off all the responsibilities coming its way especially as the US is pressuring it to be the leader in the whole case.

If Europe enters the mess, with time Canada may ask the mighty Germany or France to lead the intervention mission, hence pulling out of this whole thing completely or it will just be a party without any major roles to perform.

The image-conscious Trudeau finds it difficult to be at the target of the global audience and therefore, he is unsurprisingly attempting to court European nations to help him without making it too obvious.