For the Haitian people, whose progress is being halted by gangs formed and promoted covertly by the Haitian oligarchy, supported by the imperialist power, and armed with weapons from the United States, another such intervention in the name of "human rights" would only affirm the neocolonial system currently run by Ariel Henry 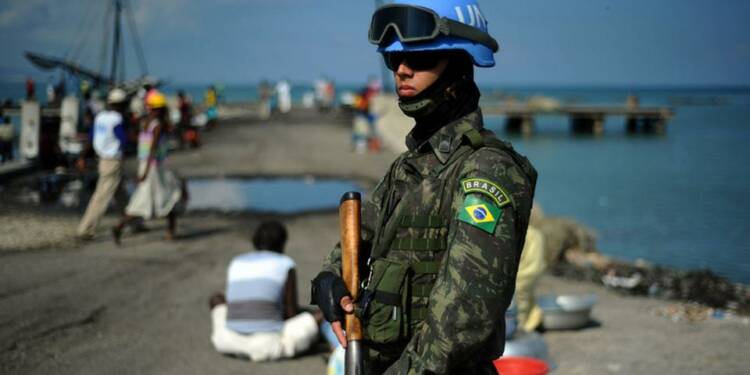 On September 24, 2022, at the UN General Assembly, Foreign Minister of Haiti Jean Victor Geneus acknowledged that his nation is in the midst of a catastrophic crisis that “can only be resolved with the effective support of our allies.”

Since the Haitian Revolution achieved its goal of independence from France in 1804, the country has experienced a series of invasions, including a two-decade US occupation from 1915 to 1934. Then, a US-backed dictatorship from 1957 to 1986. Next came two Western-backed coups against the liberal former president Jean-Bertrand Aristide in 1991 and 2004, and a UN military intervention from 2004 to 2017.

These incursions have hindered Haiti from regaining its sovereignty and from enabling its citizens to live honourable lives. The Haiti crisis will only worsen with yet another invasion, whether it be carried out by US and Canadian military or by UN peacekeeping forces.

Recently, Haiti has seen a populist uprising. The cycle of resistance that started in 2016 in reaction to a societal crisis brought on by the coups in 1991 and 2004, the earthquake in 2010, and Hurricane Matthew in 2016 is still ongoing with these protests.

Every attempt by the Haitian people to leave the neo-colonial system that the US military occupation (1915–34) instituted has been met with military and economic measures to keep it in place for more than a century.

The Haitian people have become impoverished as a result of the dominance and exploitation mechanisms that were built by that system, with the majority of the populace lacking access to clean water, adequate healthcare, an adequate education, or acceptable housing.

During this crisis, the government of Haiti, led by acting Prime Minister and President Ariel Henry, increased fuel prices. That sparked a union backlash and strengthened the movement. After the assassination of the then president Jovenel Mose, Henry was appointed to his position in 2021 by the “white colonial powers” or to be more precise, by a group of six nations led by the US, the European Union, the UN, and the Organization of American States.

In order to intervene militarily in Haiti, the United States and Canada are currently arming Henry’s illegitimate administration. The United States presented a resolution to the UN Security Council on October 15 that demanded the “prompt deployment of a multinational quick action force” in the nation. In the more than 200 years that Western nations have intervened destructively in Haiti, this would be the most recent chapter. Since the 1804 Haitian Revolution, imperialist forces—including those who owned slaves—have interfered militarily and economically to thwart populist movements that aimed to bring an end to the neocolonial order. These forces most recently entered the nation under UN supervision under the UN Stabilization Mission in Haiti (MINUSTAH), which operated from 2004 to 2017.

For the Haitian people, whose progress is being halted by gangs formed and promoted covertly by the Haitian oligarchy, supported by the imperialist power, and armed with weapons from the United States, another such intervention in the name of “human rights” would only affirm the neo-colonial system currently run by Ariel Henry.

Without a doubt, the Haitian people alone can end the country’s problem, but they also need the powerful support of the rest of the world. If anything, imperialist countries like France and the US should pay reparations for the wealth that has been taken from Haiti since 1804.

In addition, the US-controlled United Nations should be held accountable for the atrocities committed by MINUSTAH, whose personnel murdered tens of thousands of Haitians, violated modesty of countless numbers of women, and brought cholera to the nation.

There is little question that sexual assault has developed into a widespread issue among peacekeepers. According to the Associated Press article, there have been over 2,000 complaints of sexual abuse to date, 300 of which included children. However, due to legal limitations, the U.N. is unable to prosecute offenders; instead, this duty falls on host nations, whose governments are sometimes incapable of or unwilling to take the initiative.

Read More: Puerto Rico won, but this is just the first step

The Haitian people must be given the freedom to establish their own independent, honourable, and just political and economic structure as well as systems for health, education, and welfare that can truly serve their needs.