No, Russia did not burn the EU HQ in CAR, its EU’s handy work itself 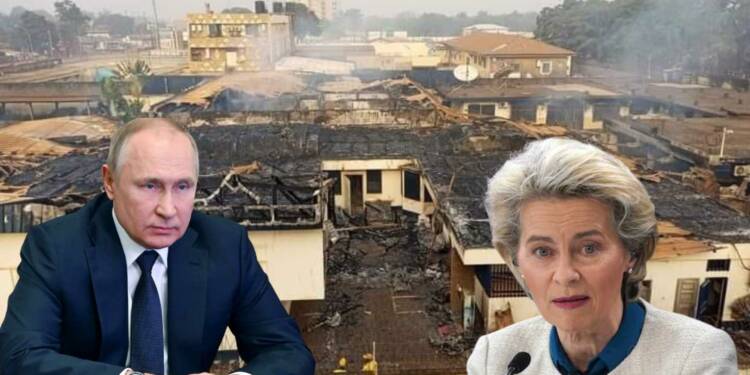 Fire at EU HQ in Central African Republic (CAR): The attitude toward the West in the Sahel has changed drastically. Western countries who were at first lauded as saviors, are now accused of failing to control the security situation and even encouraging neo-colonial dependency patterns in Africa.

The dwindling Western influence in the region is accompanied by the growing footprints of Russia. This has caused a major annoyance to the West and now they are trying every trick in their notorious foreign policy playbook to badmouth Russia, even if it means destroying their own headquarters.

A few days ago, the Central African Republic (CAR) stated that an unidentified aircraft bombed its military camp (EU HQ). As we have previously covered in detail, President Joe Biden may have used neighbouring Chad as an American marionette to threaten the Central African Republic in order to limit the expanding influence of the Russian Wagner group.

Now, according to recent reports, a fire outbreak has destroyed the headquarters of the European Union (EU) Commission in Bangui, capital of the Central African Republic.

Bienvenu Zokoué, the Chief of the domestic security of the African country, said that the cause is unknown and that authorities have launched probe into the incident. “The damage will be enormous,” he added.

Be aware that many Western authorities and analysts portray this action as payback from CAR and Moscow for the last bombing. This claim seems reasonable on the surface, even to ordinary people. But truth be told, there’s more than what meets the eye.

Why Russia won’t burn the EU HQ in CAR

You know, Russia and Ukraine have been engaged in a brutal struggle for about a year. European issues are on Vladimir Putin’s agenda. He would not have been foolish to launch a new hot war in Africa, especially in a region where Moscow already has a significant foothold.

For years, Russia has engaged in a series of multifaceted outreach projects and has created a number of footholds in Africa, including in the Sahel region. In addition to pursuing natural resources, Moscow has placed private military contractors and consultants in various African governments, including the Central African Republic. Violence in the CAR would only deteriorate relations between Moscow and Bangui. So why would Putin commit such act of self-sabotage?

And as history attests, it is not how Russian foreign policy operates, as Moscow adopts a realpolitik stance that is typical of Russian foreign policy and refrains from making any statements regarding the domestic political climate or the state of human rights in Afghanistan. This stands in stark contrast to Western foreign policy, which has a putrid smell of paternalism and imperialism and entices Western nations to engage in nation-building activities based on modern western framework on territories with distinct cultures, forcing them to stay involved in such regions for decades.

Pardon my recency bias, but the Ukraine war could be a great case study. In the West, it is widely believed that Russia’s aggression is to blame for practically the whole Ukraine conflict. The argument makes the case that Russian President Vladimir Putin annexed Crimea as part of a long-standing goal to revive the Soviet empire and that he may ultimately target the remainder of Ukraine as well as other nations in eastern Europe.

Whereas, the United States and its European allies bear the majority of the blame for the crisis, contradicting this perspective. The primary component of a wider plan to pull Ukraine out of Russia’s sphere of influence and integrate it into the West, and the source of all the problems, is NATO expansion. The opposition from Putin shouldn’t have surprised anyone.

After all, as Putin repeatedly and forcefully stated, the West had been encroaching on Russian territory and posing a threat to its fundamental strategic interests. Moscow’s strategies were therefore more influenced by survivalism than by aggrandisement.

All the facts lead us to only one conclusion: The recent attack on the European Union headquarters is the handy work of the EU itself, and it is an idiotic attempt to slander Russia by attributing the bombing to Moscow and thereby trying to change the growing reputation of Russia in the eyes of Africans.

Raghunath Temple: Timings, History, Travel guide and how to reach